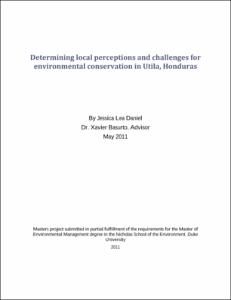 View / Download
1.3 Mb
Date
Author
Daniel, Jessica
Advisor
Basurto, Xavier
Repository Usage Stats
463
views
1,067
downloads
Abstract
The Bay Islands are a group of small islands off the coast of Honduras, comprised of three larger islands - Roatan, Utila and Guanaja - and several dozen cays. Due to the Islands’ Caribbean feel and inexpensive cost they have become a popular tourist destination for thrifty travelers and are a frequent stop for SCUBA diving enthusiasts. Major threats in the region are the destruction of natural coastal habitats by increasing coastal population and tourism developments and increased sedimentation due to extensive use of watersheds and inland deforestation. In particular, Utila has become known as one of the best diving sites in the world, placing further pressure on the island’s fragile marine and terrestrial ecosystems. Declines in island species such as the endemic iguana Ctenosaura bakeri have been documented, along with damaged coral reefs from various activities, mangrove deforestation, decreasing coral cover and noted fish declines for several fish species. This last fact may be particularly important given the large fishing community that has existed on the island for decades. Despite Utila’s small size, its roughly 8000 residents are a mix of generational Utilians, mainland Hondurans, and Ex-patriates who come from extremely diverse backgrounds, thus often making attempts to engage the community in environmental conservation difficult. In an effort to understand the environmental knowledge, attitudes and behaviors of Utila’s three main populations, an environmental survey was conducted in the summer of 2010. Results from the survey indicate that the majority of islanders recognize and are concerned with the decreasing health of the island’s ecosystems and resources. It was also found that though most individuals were aware of the island’s various environmental regulations, they recognize that the majority of people do not follow them, and that this is particularly true for fishing regulations. This finding and firsthand experiences led to an in depth look at the Honduran Fisheries Law and subsequent regulations related to the law. This paper presents the findings from the survey and also explores the possibility of using a community based environmental management approach to protect the island’s resources and monitor local fishing practices.
Type
Master's project
Department
Nicholas School of the Environment and Earth Sciences
Subject
Community-based environmental management
Environmental survey
Bay Islands
Coastal
Fishing
Permalink
https://hdl.handle.net/10161/3667
Citation
Daniel, Jessica (2011). Determining local perceptions and challenges for environmental conservation in Utila, Honduras. Master's project, Duke University. Retrieved from https://hdl.handle.net/10161/3667.
Collections
More Info
Show full item record