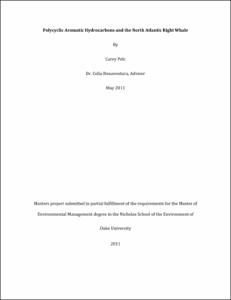 View / Download
1.5 Mb
Date
Author
Pelc, Carey
Advisor
Bonaventura, Celia
Repository Usage Stats
243
views
389
downloads
Abstract
The critically endangered North Atlantic right whale (Eubalaena glacialis) is a protected species and yet it continues to exhibit high mortality and low reproductive rates. A large amount of known mortality to right whales is caused by ship strikes and gear entanglements. Protective policies have reduced the likelihood of these types of mortalities, but low reproductive rates continue to be of concern. Many cumulative factors can play a role in the poor reproductive success of right whales, but little is known on what role contaminants such as polycyclic aromatic hydrocarbons (PAH) play. This masters project aimed to explore the relationships between PAH concentrations in right whale tissue and prey, and Cytochrome P450 (CYP1A) expression relative to various life parameters such as location, gender, age, and reproductive variables. Dermal biopsy samples were obtained from both North Atlantic and Southern right whale species in various years between 1993-2000. CYP1A expression in the endothelial tissues of the biopsies was measured. Polycyclic aromatic hydrocarbon concentrations were measured in biopsy samples from the North Atlantic species as well as from their zooplankton prey in various nearshore and offshore habitats. The results of this study show that there are significant differences in CYP1A expression in whale samples from different feeding and calving areas. Differences in the levels of expression are likely attributed to levels of contaminant exposure through prey consumption. A cross-sectional comparison of CYP1A expression and PAH levels in biopsy samples did not show a significant correlation to reproductive parameters, but a firm conclusion regarding a causal relationship was not possible due to paucity of data. A more longitudinal study is suggested to obtain higher quality information about the relationship between PAH levels and CYP1A expression and reproductive parameters. Understanding the relationships between contaminant levels and reproductive success can be useful to inform managers of other variables that could be impacting right whale health and the recovery of the species.
Type
Master's project
Department
Nicholas School of the Environment and Earth Sciences
Subject
Right Whale, polycyclic aromatic hydrocarbons, cytochrome P450, contaminants
Permalink
https://hdl.handle.net/10161/3677
Citation
Pelc, Carey (2011). Polycyclic Aromatic Hydrocarbons and the North Atlantic Right Whale. Master's project, Duke University. Retrieved from https://hdl.handle.net/10161/3677.
Collections
More Info
Show full item record