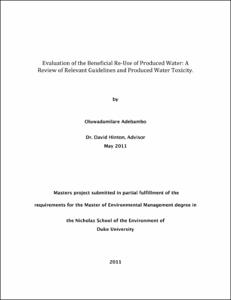 View / Download
817.7 Kb
Date
Author
Adebambo, Oluwadamilare
Advisor
Hinton, David
Repository Usage Stats
597
views
4,288
downloads
Abstract
As global demand and production of fossil fuel (oil and gas) continues to increase, so do their associated environmental footprints. One example is produced water (PW), i.e. water used or extracted along with oil. Presently, over 5 billion gallons of PW is generated daily. In the past, produced water was simply re-injected into the empty oil well after extraction. As freshwater supply becomes increasingly scarce, PW can become an important water source after suitable treatment. This masters’ project investigates the current beneficial reuse options of PW and the potential environmental risks that could result from this reuse My literature review was conducted on PW generation during oil and gas extraction, and focused on significant constituents and their characteristics, treatment methods and current regulations guiding reuse. I concentrated on land-based oil and gas extraction since these activities use valuable freshwater. Peer-reviewed publications were used when available but industry and consultant reports were also used when necessary. Researchers at Clemson University with ongoing projects on PW treatment were interviewed for more up to date information. A large body of literature confirms that toxicity of PW varies with age of the oil well and between different operations. However, salinity, dissolved oil and aromatics were often the constituents of concern. Salinity limits also confound PW toxicity assessment as current regulatory test organisms are salt intolerant. Therefore there is great need to develop cost-effective technology for desalination and to include more salt tolerant toxicity test species. Based on these findings, a decision framework was developed to better guide the beneficial reuse of PW in such a way that environmental risks are considered and minimized.
Type
Master's project
Department
Nicholas School of the Environment and Earth Sciences
Permalink
https://hdl.handle.net/10161/3709
Citation
Adebambo, Oluwadamilare (2011). Evaluation of the Beneficial Re-Use of Produced Water: A Review of Relevant Guidelines and Produced Water Toxicity. Master's project, Duke University. Retrieved from https://hdl.handle.net/10161/3709.
Collections
More Info
Show full item record