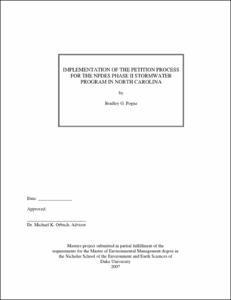 View / Download
28.2 Mb
Date
Author
Pogue, Bradley G.
Advisor
Orbach, Michael K.
Repository Usage Stats
356
views
115
downloads
Abstract
The North Carolina General Assembly recently passed Session Law 2006-246, which establishes the final administrative rules for the implementation of the EPA NPDES Phase II stormwater program in North Carolina. According to these rules, any person may petition the Environmental Management Commission to require an entity that discharges stormwater to obtain a Phase II stormwater permit. A methodology was developed to guide the collection of the required data for an adverse impact petition, based on a case study of the municipal separate storm sewer system of Morehead City, NC. This case study was then used to examine the key elements of this process in the context of their application to a Phase II petition in a coastal environment, and to explore the challenges arising during this process. General petition provisions were originally included in the Phase II rules by the EPA to provide one of several opportunities for public participation in the NPDES stormwater program. It was initially thought that the detailed requirements regarding the petition process in North Carolina would enhance the ability of the general public to play a direct role in requiring more stringent stormwater management along the coast through the Phase II stormwater program. However, in developing the adverse impact petition methodology and applying it in a preliminary case study of Morehead City, it appears that the extensive requirements of the North Carolina petition rules may actually make the completion of a successful petition quite challenging, particularly for members of the general public. Thus, rather than simplifying the process, these rules may instead discourage the submission of Phase II petitions in North Carolina, at least in the near future, and limit their usefulness as a stormwater management tool.
Type
Master's project
Department
Nicholas School of the Environment and Earth Sciences
Subject
North Carolina General Assembly
Stormwater
Morehead City, North Carolina
Management
Permalink
https://hdl.handle.net/10161/371
Citation
Pogue, Bradley G. (2007). Implementation of the petition process for the NPDES Phase II stormwater program in North Carolina. Master's project, Duke University. Retrieved from https://hdl.handle.net/10161/371.
Collections
More Info
Show full item record