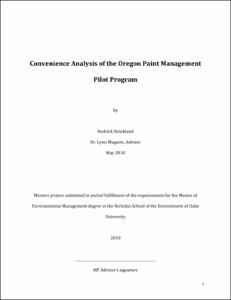 View / Download
682.7 Kb
Date
Author
Strickland, Cecilia Hedrick
Advisor
Maguire, Lynn
Repository Usage Stats
267
views
437
downloads
Abstract
The US Environmental Protection Agency estimates that approximately 10%, or 64 million gallons, of the architectural paint that is purchased annually in the United States is left over. This represents a disposal cost to municipalities of about $8 per gallon, or half a billion dollars per year. Oregon’s Paint Product Stewardship Law, passed in the summer of 2009 and implemented in July 2010, is the nation’s first manufacturer-financed program for managing leftover architectural paint. This program is currently undergoing evaluation, the results of which will be used to more effectively implement similar programs nationwide. The objective of my project is to determine how convenient the drop-off locations are for Oregon residents, including those in urban and rural areas, based on the travel time and distance to the nearest drop-off facility. I generated service areas and estimated the percentage of each census block’s population that resides within the service areas as equal to the percentage of total road length in each block that is included in the service area. Based on this analysis, more than 90% of Oregon residents live within 20 minutes, or 15 miles, of the nearest collection facility. This degree of convenience, however, is not evenly distributed throughout the state. The most underserved residents include those living in Gilliam, Douglas, Polk, and Lincoln counties. Fewer than 3% of Gilliam county residents live within 15 miles of a drop-off location, compared to 40% in the county with the next lowest percentage. Likewise, Douglas, Polk, and Lincoln counties have a low percentage of residents within 15 miles of a drop-off location and they have among the largest number of people, relative to other counties, outside of this service area. Additionally, I developed a Site Selection and Convenience Analysis tool to aid in the selection of drop-off facilities based on the same convenience criteria. This tool is flexible and adaptive. It can be used during the development of recycling programs in other areas to determine which set of potential drop-off sites provide the best access to residents or which potential drop-off sites best complement the existing network of drop-off sites.
Type
Master's project
Department
Nicholas School of the Environment and Earth Sciences
Subject
convenience
paint stewardship
network analysis
GIS
decision support tool
location allocation
Permalink
https://hdl.handle.net/10161/3712
Citation
Strickland, Cecilia Hedrick (2011). Convenience Analysis of the Oregon Paint Management Pilot Program. Master's project, Duke University. Retrieved from https://hdl.handle.net/10161/3712.
Collections
More Info
Show full item record