Hydrologic variation and lake sediments: a reconstruction of the Bolivian Lowlands over the last 5,500 years 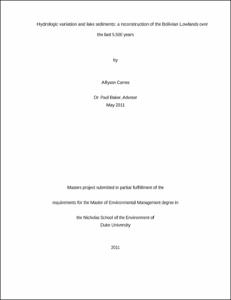 View / Download
830.1 Kb
Date
Author
Carnes, Allyson
Advisor
Baker, Paul A.
Repository Usage Stats
270
views
323
downloads
Abstract
Sediment cores raised from the shallow floor of Lake Opabusu in the Bolivian Gran Chaco record 5500 years of hydrologic change in the surrounding region. Sediment samples were analyzed for their organic carbon and nitrogen contents and stable isotopic ratios as well as for their CaCO3 contents. These analyses indicate a general trend from drier to wetter conditions from the mid-Holocene to present. This trend is consistent with changes observed in the northern Bolivian lowlands and in the adjacent tropical Andes. Accompanying the increase in precipitation, the C/N ratio and 13C content of sedimentary organic matter indicate an apparent trend from algal to terrestrial sources as well as a possible increase in C3 plants at the expense of drought-tolerant C4 plants. Other studies done in the neighboring Altiplano and Amazon regions corroborate the movement toward wetter conditions, and work done in the Bolivian Amazon supports the idea of a shift of the type and amount of vegetative cover in Lake Opabusu's watershed. This trend toward wetter conditions is likely governed by an orbitally-forced increase in summer insolation. The higher insolation at present intensifies the South American monsoon resulting in greater precipitation and higher lake levels; drier mid-Holocene conditions coincided with lower summer insolation. Several, but not all, general circulation model simulations, suggest that the future climate of the study region will be significantly drier and warmer by the end of the 21st century. Both changes would contribute to a negative water balance and it is likely that Lake Opabusu will dry completely in the near future. Although the lake has shrunk and expanded during the last century (as seen in historic air photos), there is no evidence within the sediment core, that the lake has previously desiccated to the depth of the core site at any time in the past five millennia.
Type
Master's project
Department
Nicholas School of the Environment and Earth Sciences
Subject
paleoclimate
Bolivia
Gran Chaco
lacustrine
mid-Holocene
Permalink
https://hdl.handle.net/10161/3717
Citation
Carnes, Allyson (2011). Hydrologic variation and lake sediments: a reconstruction of the Bolivian Lowlands over the last 5,500 years. Master's project, Duke University. Retrieved from https://hdl.handle.net/10161/3717.
Collections
More Info
Show full item record