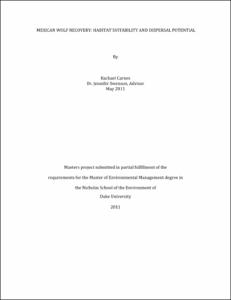 View / Download
2.2 Mb
Date
Author
Carnes, Rachael
Advisor
Swenson, Jennifer
Repository Usage Stats
395
views
994
downloads
Abstract
For the first time since 1982, the United States Fish and Wildlife Service (USFWS) is in the process of updating the Mexican Gray Wolf Recovery Plan. In order to provide comprehensive recommendations regarding the conservation of this species, potential habitat must be delineated throughout its historic range. Assessments of favorable habitat, dispersal potential, and reintroduction feasibility have been published for the Pacific Northwest, the northeastern U.S., the Great Lakes, and the northern Rockies. Such projects provide a strong methodological foundation for developing analogous research in the Southwest, where relatively few studies have taken place. The purpose of this study was to aid the USFWS in its efforts by completing a spatial analysis of favorable Mexican wolf habitat and connectivity potential. With the use of a geographic information system, habitat models were developed and tested within the Mexican Gray Wolf Experimental Population Area. Results from this analysis were then extrapolated to the majority of the Mexican gray wolf’s historic range, encompassing New Mexico, Arizona, Utah and Colorado. Based on a literature review of landscape attributes observed to influence wolf habitat selection and mortality, the following variables were selected to model wolf habitat: land cover type, elevation, distance from roads, human density, and distance from ranching operations. Patches of viable habitat were identified and connectivity between them was analyzed. The results of this analysis present 181,584 km2 of suitable Mexican wolf habitat throughout the four-state region. The largest patch comprises 23,202 km2 of land (approximately 30% of which is currently protected as designated Wilderness Area, National Forest, or State Forest). This area alone is most likely capable of supporting 240-480 individual wolves. Five of the largest habitat patches identified are functionally connected through a network of corridors. Deforestation and anthropogenic encroachment are endangering one of these essential linkages, posing a threat to future wolf dispersal into southern Colorado. Based on the conclusions developed from this study, recommendations were provided to the USFWS to aid in the development of realistic recovery goals and possible reintroduction sites for Mexican gray wolf conservation.
Type
Master's project
Department
Nicholas School of the Environment and Earth Sciences
Subject
Mexican wolf, habitat, corridor, connectivity, Southwest
Permalink
https://hdl.handle.net/10161/3722
Citation
Carnes, Rachael (2011). MEXICAN WOLF RECOVERY: HABITAT SUITABILITY AND DISPERSAL POTENTIAL. Master's project, Duke University. Retrieved from https://hdl.handle.net/10161/3722.
Collections
More Info
Show full item record