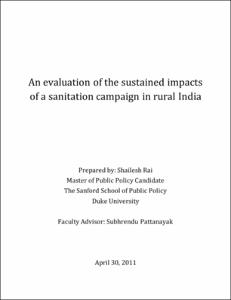 View / Download
1016.9 Kb
Date
Author
Rai, Shailesh
Advisor
Pattanayak, Subhrendu K
Repository Usage Stats
498
views
2,018
downloads
Abstract
Poor water and sanitation facilities and unhygienic practices contribute to millions of child deaths every year. India is perhaps the worst affected country. Annually, over half a million children die of diarrhea in India. I examine the sustained effects on sanitation and child health of a randomized sanitation campaign conducted in rural Orissa, India, in 2005-06 by a team from RTI International, the World Bank and the government of Orissa. The campaign was based on the community-led total sanitation (CLTS) methodology and combined subsides to poor households with strategies to increase household latrine adoption by inducing emotional responses to open defecation. My analysis reveals that latrine ownership rose significantly in treatment villages even after the campaign ended, especially among poor households. In these households, latrine ownership surged from 35% in 2006 to 49% in 2010, while in other households, it increased from 30% to 32%. In contrast, only around 19% of both poor and non-poor families in control villages owned latrines in 2010. Over 15% of all households in villages that received the sanitation campaign constructed individual latrines after the campaign ended, indicating considerable diffusion of latrine adoption in addition to continued latrine ownership. The diffusion is pronounced in BPL households, which comprise around 74% of the ‘late’ adopters. The intervention also seems to have decreased diarrhea incidence, but these results are not as clear-cut. These figures indicate that the benefits of the campaign did not diminish over time, and the impact of the evaluation was underestimated in the short run. They also suggest that the subsidies given to poor families were responsible for more than half of the continued effect of the campaign, which calls into question the strict no-subsidies approach followed by many international organizations. Further research into the mechanisms of behavior change is vital if the Millennium Development Goals of improved sanitation are to be met.
Type
Master's project
Department
The Sanford School of Public Policy
Subject
sanitation latrines diarrhea India child health
Permalink
https://hdl.handle.net/10161/3726
Citation
Rai, Shailesh (2011). An evaluation of the sustained impacts of a sanitation campaign in rural India. Master's project, Duke University. Retrieved from https://hdl.handle.net/10161/3726.
Collections
More Info
Show full item record