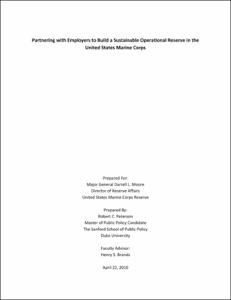 View / Download
1.2 Mb
Date
Author
Peterson, Robert
Advisor
Brands, Henry
Repository Usage Stats
285
views
242
downloads
Abstract
Policy Question This paper explores policy options available to the United States Marine Corps that strengthen its ability to sustain the Reserve Component as an operational force, by asking: How should the United States Marine Corps partner with civilian employers of reservists to implement an “operational” reserve that is sustainable during peacetime? Background The reserve component of the United States Marine Corps will continue to fill an operational role after the drawdown of American forces in Iraq and Afghanistan. The concept behind the operational reserve envisions the deployment of reservists in a periodic and sustained fashion to support theater security engagements and cooperative security agreements. When put into practice, reservists will be required to regularly deploy overseas. Reservists are only part-time members of the military and most depend on a civilian employer for their livelihood. While businesses have generally been supportive of deployments during periods of conflict, it is unclear how they will view continued deployments, absent an existential crisis. Since reservists depend upon civilian employers for their livelihood, their support is necessary to sustain a peacetime operational reserve.
Type
Master's project
Department
The Sanford School of Public Policy
Subject
Marine Corps
Military
Reserves
Small Business
Employers
Permalink
https://hdl.handle.net/10161/3728
Citation
Peterson, Robert (2011). Partnering with Employers to Build a Sustainable Operational Reserve in the United States Marine Corps. Master's project, Duke University. Retrieved from https://hdl.handle.net/10161/3728.
Collections
More Info
Show full item record