Echosounder Effects on Beaked Whales in the Tongue of the Ocean, Bahamas 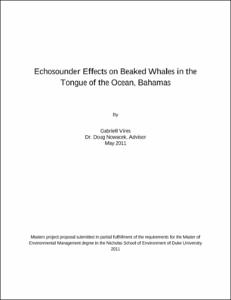 View / Download
639.8 Kb
Date
Author
Vires, Gabriell
Advisor
Nowacek, Douglas
Repository Usage Stats
483
views
877
downloads
Abstract
Increasing human activity in the ocean has lead to an increase in anthropogenic noise in the ocean. Beaked whales are deep-diving odontocetes known to feed in the tongue of the ocean, Bahamas. Recent studies show that anthropogenic noise in the sea can have significant effects on marine mammals. Of particular concern are beaked whales, which have been shown to mass strand in response to naval sonar. The detrimental link between naval sonar and marine mammals has been established in several court cases, but little is known about the effects echosounders, used in scientific research, have on marine mammals. This master’s project investigates the effects echosounders may have on beaked whales in the tongue of the ocean, Bahamas, as well as the policy and management implications surrounding this issue. In 2008 an echosounder was deployed in the study area and the corresponding beaked whale click data was obtained from the Naval Undersea Warfare Center. The data were analyzed to determine whether a change or cessation in click activity occurred pre-, during or post echosounder deployment. The results indicated that no change was observed in click duration comparing pre-, during or post echosounder deployment. The data sets for during and post echosounder deployments were significantly smaller than pre- and could be a contributing factor to these results. These results are preliminary and further analysis into the behavioral effects of echosounders on beaked whales will be conducted. Alongside this, recent studies have shown that beaked whales respond to acoustic stimuli at much lower levels than are currently regulated for marine mammals, suggesting that there is need for a lower threshold for beaked whales in the United States than is currently being implemented.
Type
Master's project
Department
Nicholas School of the Environment and Earth Sciences
Subject
echosounder
beaked whales
naval sonar
marine bioacoustics
marine mammal
Bahamas
Permalink
https://hdl.handle.net/10161/3729
Citation
Vires, Gabriell (2011). Echosounder Effects on Beaked Whales in the Tongue of the Ocean, Bahamas. Master's project, Duke University. Retrieved from https://hdl.handle.net/10161/3729.
Collections
More Info
Show full item record