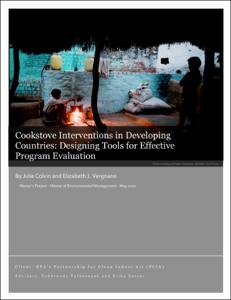 View / Download
10.3 Mb
Date
Authors
Vergnano, Elizabeth J
Colvin, Julie
Advisors
Pattanayak, Subhrendu K.
Sasser, Erika
Repository Usage Stats
583
views
694
downloads
Abstract
Approximately half of the world’s population depends on biomass and coal as fuel for household energy. Burning these fuels in traditional cookstoves creates detrimental social, health, and environmental impacts that can be minimized through the dissemination and adoption of improved cookstoves. The purpose of this master’s project is tri-fold:(1) to re-design content of baseline survey instrument, or partner reporting form, for continued administration by the PCIA; (2) to determine factors that influence PCIA partner effectiveness based on data collected through the 2008, 2009, and 2010 surveys; (3) to identify global-scale PCIA expansion opportunities based on national social, environmental, and health indicators. PCIA’s existing partner-level survey instrument was re-designed in 2010 to enable the PCIA to consistently track partner progress over time and analyze key factors influencing the rate of clean cookstove adoption. A partner-level statistical analysis was performed using data generated from past PCIA surveys distributed in 2008 and 2009 as well as the re-designed 2010 survey. The results from the regression model indicated that the number of improved stoves sold is correlated with the program location, the organization type that delivers the stoves and the presence of national cookstove standards. At the organizational level, stove sales were found to be positively correlated with the inclusion of a low-cost stove option, community outreach activities, stove performance testing, and a strong organizational mission directly related to the benefits of improved cookstoves. A global-scale statistical analysis was conducted using a Poisson and logistic regression model. The goal was to determine in which countries the PCIA partners are currently located and where they should be located based on environmental, health, and socioeconomic indicators. The results of this analysis found that the PCIA partners are operating in countries with higher rates of respiratory infections, solid fuel use, government expenditures on health, and population, but with lower rates of particulate matter emissions (PM 10). Using a prediction model based on the same regression of the global statistical analysis, it was found that PCIA could productively target additional resources and program efforts in Myanmar, Somalia, Afghanistan, Democratic Republic of Congo, and Ethiopia.
Type
Master's project
Department
Nicholas School of the Environment and Earth Sciences
Subject
international development
program evaluation
public health
policy
Partnership for Clean Indoor Air
cookstove
Permalink
https://hdl.handle.net/10161/3731
Citation
Vergnano, Elizabeth J; & Colvin, Julie (2011). Cookstove Interventions in Developing Countries: Designing Tools for Effective Program Evaluation. Master's project, Duke University. Retrieved from https://hdl.handle.net/10161/3731.
Collections
More Info
Show full item record