The Conservatization of the 386 Generation: Cohort Effects in Voting Behavior of a political Generation in South Korea 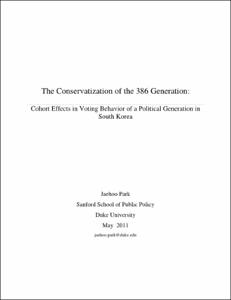 View / Download
7.0 Mb
Date
Author
Park, Jaehoo
Advisor
Kelley, Judith
Repository Usage Stats
517
views
725
downloads
Abstract
Executive Summary This study concentrates on the research question that whether the 386 Generation maintain its cohort effects. The 386 Generation was coined in the 1990s to describe those Koreans in their 30s who were born in the 1960s and entered the university in the 1980s. This political generation is known as liberal and they are considered to maintain its liberalism because they spent most of their 20s fighting against authoritarian rule and shared common sentiment in favor of democracy. It seems that they have shown their liberalism through a series of elections, especially in 2002. However, in 2007, their support for the non-conservatives decreases remarkably, which arouses a suspicion on their liberalism and cohort effects. In order to figure out cohort effects of the 386 Generation, this study set Korean generations into five categories by 10 years, and recode the party identification into two groups: the conservatives and the non-conservatives. Logistic regressions with the voting choice variable as a dependent variable and OLS regression with the ideology variable as a dependent variable are implemented. The control variables include sex, income, degree of education, occupations, regions of the origin and generations. The previous election result, self-reported ideology and their interaction term with the generations are respectively added in each model. This study uses 1992, 1997, 2002, and 2007 Korean Presidential Election Study(KPES) cross-sectional data from the Institute for Korean Election Studies. The survey were conducted by the Korea Social Science Data Center using face-to-face interview with approximately 1,200 voters right after each election. This study could not find any evidence for cohort effects of the 386 Generation. The 386 Generation maintains consistent low probability of voting choice for the non-conservatives, and even shows lower support for the non-conservatives in 2007. Decreasing gap with the Industrialization Generation and insignificant and statistically insignificant result of the interaction term between the previous election and the 386 Generation are other evidence that the 386 Generation does not maintain its cohort effects. Therefore, when it is compared to other generations, the 386 Generation become also conservative like other generations, without cohort effects.
Type
Master's project
Department
The Sanford School of Public Policy
Subject
Cohort effects, Political Generation, 386 Generation, Voting Behavior
Permalink
https://hdl.handle.net/10161/3734
Citation
Park, Jaehoo (2011). The Conservatization of the 386 Generation: Cohort Effects in Voting Behavior of a political Generation in South Korea. Master's project, Duke University. Retrieved from https://hdl.handle.net/10161/3734.
Collections
More Info
Show full item record