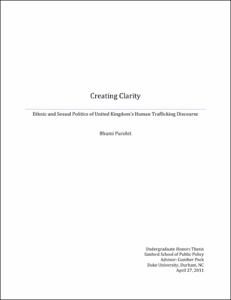 View / Download
970.0 Kb
Date
Author
Purohit, Bhumi
Repository Usage Stats
502
views
430
downloads
Abstract
Human trafficking has become a prominent political issue in the United Kingdom since 2001, with all major parties in the country agreeing on the importance of abolishing trafficking. However, the political discourse is riddled with two frameworks, with each party supporting one or the other at various times: trafficking as a border security issue versus trafficking as a human rights issue. In order to examine the relationship of this discursive political dichotomy with the journalistic understanding of the issue, the paper examines discourse on sex trafficking among four major newspapers, each with a different political affiliation: The Daily Telegraph, The Times, The Guardian, and The Independent. The study finds that the nineteenth century perception of innocent, and usually white and virgin women being lured into trafficking by “evil” foreign traffickers is still implicitly present in modern-day journalistic discourse. The presence of these ethnic and sexual politics, which influence the border security and human rights frameworks, respectively, confound the reality of trafficking with a discursive myth. The journalistic discourse thus has a policy implication of victims needing to fit the discursive mold of a trafficked person in order to receive human rights protections. Though finding a factual account of trafficking is difficult, adding voices of trafficked persons to narratives may create a clearer picture of the issue, and lead to better protections for trafficked persons in U.K. policy.
Type
Honors thesis
Department
Public Policy Studies
Subject
Human trafficking
Discourse
Ethnic politics
Sexual politics
White slavery
Permalink
https://hdl.handle.net/10161/3744
Citation
Purohit, Bhumi (2011). Creating Clarity: Ethnic and Sexual Politics of United Kingdom's Human Trafficking Discourse. Honors thesis, Duke University. Retrieved from https://hdl.handle.net/10161/3744.
Collections
More Info
Show full item record