The Role of Self-Control in Forgiveness 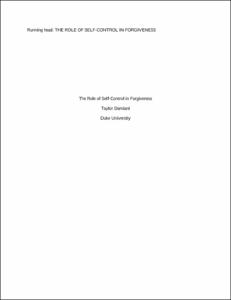 View / Download
329.3 Kb
Date
Repository Usage Stats
397
views
1,527
downloads
Abstract
A study was designed to examine the influence of self-control depletion and positive mood induction on forgiveness. In a controlled experiment, 123 undergraduates played a computer game in which they were led to believe that they were mistreated by an opponent. Participants’ forgiveness of the opponent was measured using the Transgression-Related Interpersonal Motivations inventory after a self-control manipulation (self-control depletion or no depletion) and a subsequent mood induction manipulation (positive or neutral mood). As expected, self-control depletion negatively affected avoidance motivation (a subcategory of forgiveness) such that depleted individuals showed higher avoidance motivation on average. Positive mood induction, however, had no effect on forgiveness levels. These findings suggest that, to a degree, forgiveness requires self-control.
Type
Honors thesis
Department
Psychology
Permalink
https://hdl.handle.net/10161/3745
Citation
(2011). The Role of Self-Control in Forgiveness. Honors thesis, Duke University. Retrieved from https://hdl.handle.net/10161/3745.
Collections
More Info
Show full item record