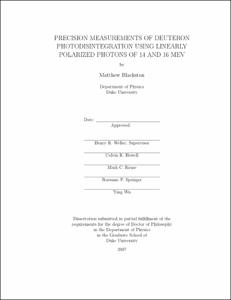 View / Download
3.1 Mb
Date
Author
Blackston, Matthew Allen
Advisor
Weller, Henry R
Repository Usage Stats
314
views
1,230
downloads
Abstract
A precision measurement of the d(gamma ,n)p reaction was performed at the High Intensity gamma-ray Source (HIGS), which is located at the Duke Free Electron Laser Laboratory on the campus of Duke University. The gamma-ray beams were nearly 100% linearly polarized, allowing the angular distributions of both the analyzing power and unpolarized cross section to be measured at 14 and 16 MeV. The photons were incident on a heavy water target and the neutrons from the photodisintegration reaction were detected using the Blowfish detector array, which consists of 88 liquid scintillator detectors with large angular coverage.A transition matrix element (TME) analysis was performed on the data which allowed the amplitudes of the TMEs which contribute to the reaction at these energies to be extracted. This was done by invoking Watson's theorem, which fixes the relative TME phases using the n-p scattering phase shifts, leaving the TME amplitudes as free parameters in fits to the data. The results indicated very good agreement with a recent potential model calculation for the amplitudes of the three electric dipole (E1) p-waves, which account for over 90% of the cross section at these energies.The extracted TME amplitudes were then used to construct the observable which enters into the Gerasimov-Drell-Hearn (GDH) Sum Rule integrand. The results are the first experimental indication of a positive value of the GDH integrand in the region near photodisintegration threshold. A positive value at these energies has been shown by theory to be due to relativistic contributions.
Type
Dissertation
Department
Physics
Subject
Physics, Nuclear
nuclear
photodisintegration
deuteron
gamma
rays
polarized
GDH Sum Rule
Permalink
https://hdl.handle.net/10161/375
Citation
Blackston, Matthew Allen (2007). PRECISION MEASUREMENTS OF DEUTERON PHOTODISINTEGRATION USING LINEARLY POLARIZED PHOTONS OF 14 AND 16 MEV. Dissertation, Duke University. Retrieved from https://hdl.handle.net/10161/375.
Collections
More Info
Show full item record