Ideology and the Child: A Comparison of Canonical and Non-Canonical Children's Literature Featuring British India 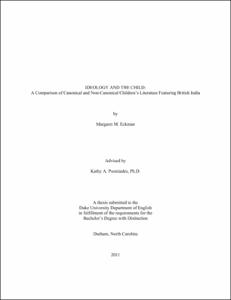 View / Download
257.9 Kb
Date
Author
Eckman, Margaret
Repository Usage Stats
435
views
1,146
downloads
Abstract
The aim of this project is twofold: to explore the ideology apparent in children’s literature and to examine the generic features that may be found in canonical fiction when compared with non-canonical fiction. Colonial India is used as a case study for these questions, with the primary source texts having been written for British children during the time India was part of the British Empire. The first chapter examines The Secret Garden by Frances Hodgson Burnett, published in 1911, and two non-canonical books written for the same audience of young children, The Baba Lōg: A Tale of Child Life in India by James Middleton MacDonald, published in 1896, and Puck and Pearl: The Wanderings and Wonderings of Two English Children in India by Frederika Macdonald (unrelated), published in 1887. The chapter explores the feelings of the British about India and the relationships they wished their children to have with the colony, which focused on the British superiority over India. The second chapter looks at Rudyard Kipling’s Kim (1901) as a change in the genre of boys’ adventure fiction and in literature after the Indian Mutiny. As Christopher Herbert describes post-Mutiny literature in War of No Pity, two divisions existed: one acknowledging that the British treatment of the Indians was wrong (280), and another reacting against the events that had occurred (282). The latter is the treatment of two non-canonical boys’ adventure books, G.A. Henty’s With Clive in India (1884) and Christopher James Riethmüller’s The Adventures of Nevil Brooke: Or, How India Was Won for England (1877), while Kim takes a different path in dealing with the Mutiny by creating a magical world. Kim also exemplifies the change described in The Imperial Archive by Thomas Richards from a world in which land is power, as in the two non-canonical books, to one in which knowledge is power (5).
Type
Honors thesis
Department
English
Subject
British India
children's literature
non-canonical
colonial India
Permalink
https://hdl.handle.net/10161/3752
Citation
Eckman, Margaret (2011). Ideology and the Child: A Comparison of Canonical and Non-Canonical Children's Literature Featuring British India. Honors thesis, Duke University. Retrieved from https://hdl.handle.net/10161/3752.
Collections
More Info
Show full item record