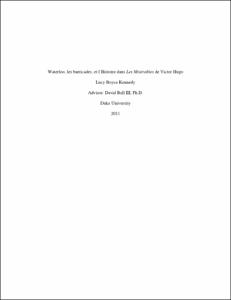 View / Download
210.2 Kb
Date
Author
Kennedy, Lucy Boyce
Repository Usage Stats
792
views
12,998
downloads
Abstract
This thesis examines two scenes from Victor Hugo’s Les Misérables: the description of the battle of Waterloo and the description of the barricades of June 5-6, 1832. These two scenes may be considered as the opening and closing, respectively, of Les Misérables. First, I discuss the historical importance of Waterloo and the temporal link between the novel’s plot and the events of the 19th century. I then consider Hugo’s understanding of history, particularly as it is presented in his discussion of Waterloo and the barricades of 1832. The next section of my thesis examines the theme of the “passant” (passer-by), which reappears not only during the discussions of Waterloo and the barricades but also throughout the story of the protagonist, Jean Valjean. I then consider a famous scene from each of these sections: the heroic death of Cambronne at Waterloo and of Gavroche at the barricades. I use Hugo’s discussion of the sublime and the grotesque in the Préface de Cromwell to examine the comedy and tragedy of these two scenes. Finally, I argue that the section preceding “Waterloo” may be considered as a prologue to Les Misérables, while the section following the barricades may be considered as its epilogue.
Type
Honors thesis
Department
Romance Studies
Permalink
https://hdl.handle.net/10161/3772
Citation
Kennedy, Lucy Boyce (2011). Waterloo, les barricades, et l’Histoire dans Les Misérables de Victor Hugo. Honors thesis, Duke University. Retrieved from https://hdl.handle.net/10161/3772.
Collections
More Info
Show full item record