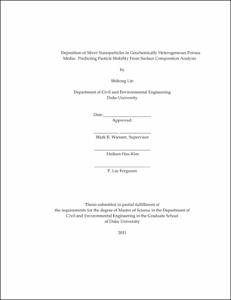 View / Download
3.9 Mb
Date
Author
Lin, Shihong
Advisors
Wiesner, Mark R
Hsu-Kim, Heileen
Ferguson, P. Lee
Repository Usage Stats
429
views
1,012
downloads
Abstract
The transport of uncoated silver nanoparticles (AgNPs) in a porous medium composed of silica glass beads modified with a partial coverage of iron oxide (hematite) was studied and compared to that in a porous medium composed of unmodified glass beads (GB). At a pH lower than the point of zero charge (PZC) of hematite, the affinity of AgNPs for a hematite-coated glass bead (FeO-GB) surface was significantly higher than that for an uncoated surface. There was a linear correlation between the average nanoparticle affinity for media composed of mixtures of FeO-GB and GB collectors and the relative composition of those media as quantified by the attachment efficiency over a range of mixing mass ratios of the two types of collectors, so that the average AgNPs affinity for these media is readily predicted from the mass (or surface) weighted average of affinities for each of the surface types. X-ray photoelectron spectroscopy (XPS) was used to quantify the composition of the collector surface as a basis for predicting the affinity between the nanoparticles for a heterogeneous collector surface. A correlation was also observed between the local abundances of AgNPs and FeO on the collector surface.
Type
Master's thesis
Department
Civil and Environmental Engineering
Subject
Geological Phenomena
Hydrodynamics
Hydrogen-Ion Concentration
Iron
Metal Nanoparticles
Photoelectron Spectroscopy
Porosity
Silver
Sodium Hydroxide
Surface Properties
Permalink
https://hdl.handle.net/10161/3775
Citation
Lin, Shihong (2011). Deposition of silver nanoparticles in geochemically heterogeneous porous media: predicting affinity from surface composition analysis. Master's thesis, Duke University. Retrieved from https://hdl.handle.net/10161/3775.
Collections
More Info
Show full item record