Economic Voting and Regionalism in South Korea: A Statistical Analysis of the 2007 Presidential Election 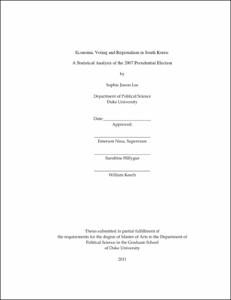 View / Download
787.0 Kb
Date
Author
Lee, Sophie Jiseon
Advisor
Niou, Emerson
Repository Usage Stats
505
views
2,116
downloads
Abstract
Although economic voting is a common phenomenon in most democracies, voters in young democracies do not necessarily vote based on the economy because at the early stage of democratization, the salience of political issues, regarding transition, overwhelms economic issues. Similarly, economic voting has not been observed in newly democratized South Korea since its first meaningful election in 1987. The absence of economic voting in Korea has widely been attributed to the overriding effect of regionalism, the phenomenon in which Jeolla and Gyeongsang natives vote for candidates born in their provinces. Against this backdrop, this paper argues that economic voting recently gained strength with 1) the consolidation of Korean democracy and 2) the traumatic experience of the IMF. In the meantime, the pre-democratic resource allocation political division, regionalism, has developed into the ideologies of native Jeolla and Gyeongsang voters today; liberal Jeolla natives tend to value distributive justice and freedom of speech, while conservative Gyeongsang natives value economic growth and security. To support this theory, the study provides empirical evidence for the rise of economic voting in Korea. The results of the empirical analysis are fourfold. First, a time series regression model shows that economic voting in Korea is not observed over time at the macro level. Yet, a correlation analysis shows that economic indicators have stronger relationships with recent presidential electoral outcomes. Second, a multinomial logistic regression model shows that both economic voting and regionalism are statistically significant at the micro level. Third, an estimated effect analysis of the same data shows that the variables in the order of the largest marginal effect on the electoral outcome are: party identification, economic voting, and regionalism. Although the overall impact of economic voting exceeds that of regionalism, the result is contrary among Jeolla natives. Finally, a subset analysis shows that Jeolla and Gyeongsang natives vote economically whereas those born elsewhere vote ideologically. This suggests that the regional division has become an ideological division among Jeolla and Gyeongsang natives. Taking all the results into consideration, both economic and democracy issues in Korea seem to have become valence issues, as in other consolidated democracies.
Type
Master's thesis
Department
Political Science
Subject
Political Science
Asian Studies
Economic Voting
Election
Regionalism
South Korea
Permalink
https://hdl.handle.net/10161/3779
Citation
Lee, Sophie Jiseon (2011). Economic Voting and Regionalism in South Korea: A Statistical Analysis of the 2007 Presidential Election. Master's thesis, Duke University. Retrieved from https://hdl.handle.net/10161/3779.
Collections
More Info
Show full item record