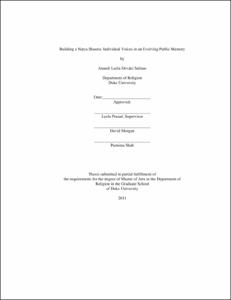 In this project, I reassess fundamental assumptions about tradition, classicality, and authenticity by exploring how artists of various Indian dance forms construct and engage these terms in the retelling of the history of their dance styles. To explore the nuances in the negotiation of terminology in the creation of oral histories, as well as to showcase the dancing itself, I have chosen to look at both dance and narrative in multiple formats of video and text. This paper serves both to survey the ethnographic process of making the film as well as to further explore the theoretical possibilities that were evoked in the many narrations in the film. I will eventually suggest that the formulations of classicality and authenticity in relation to text and temple point to the importance of concept of public memory in the creation of a dynamically constituted tradition rooted in foundational texts such as the Nāṭya Śāstra and living traditions connected to dance lineages and teachers.