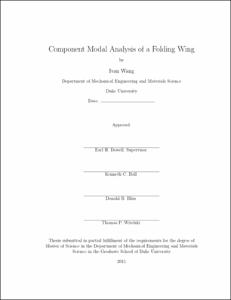 This thesis explores the aeroelastic stability of a folding wing with an arbitrary number of wing segments. Simplifying assumptions are made such that it is possible to derive the equations of motion analytically. First, a general structural dynamics model based on beam theory is derived from a modal analysis using Lagrange's equations, and is used to predict the natural frequencies of different folding wing configurations. Next, the structural model is extended to an aeroelastic model by incorporating the effects of unsteady aerodynamic forces. The aeroelastic model is used to predict the flutter speed and flutter frequencies of folding wings. Experiments were conducted for three folding wing configurations - a two-segment wing, a three-segment wing, and a four-segment wing - and the outboard fold angle was varied over a wide range for each configuration. Very good agreement in both magnitude and overall trend was obtained between the theoretical and experimental structural natural frequencies, as well as the flutter frequency. For the flutter speed, very good agreement was obtained for the two-segment model, but the agreement worsens as the number of wing segments increases. Possible sources of error and attempts to improve correlation are described. Overall, the aeroelastic model predicts the general trends to good accuracy, offers some additional physical insight, and can be used to efficiently compute flutter boundaries and frequency characteristics for preliminary design or sensitivity studies.