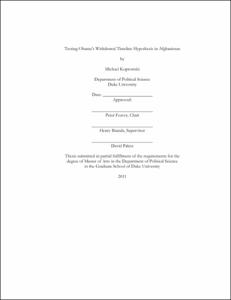 The Obama Administration argued that a publicly announced withdrawal timeline would help further US counterinsurgency (COIN) objectives in Afghanistan by incentivizing better behavior from the Karzai government and the Afghan people. An endless troop commitment, the Administration believed, fostered a dependency that allowed, and possibly even encouraged, poor governance and rampant corruption to persist - a timeline, it claimed, would sever the continual dependency by signaling that US commitment would not last forever, serving to focus, energize, and quicken the Karzai government's efforts to build a secure, durable, self-sufficient state. Moreover, it argued, a timeline would send a message of urgency to the Afghan people to take charge of their own affairs and to consent to their government's rule in greater numbers. In this essay, I test the "Obama timeline hypothesis" in order to determine whether it is truly likely to produce the positive change that the Administration claims it will. By utilizing a mix of consistent historical predictors, deductive logic based on contemporary COIN theory, and currently available evidence, I conclude that the withdrawal timeline has not produced, and likely will not produce, the results that the Administration claimed it would and that, on the whole, it has likely engendered perverse incentives for the Karzai government and the Afghan people that run contrary to America's desired COIN objectives. More broadly, the Afghan case, along with America's recent experience in Iraq, should make US policymakers deeply skeptical of assertions that withdrawal timelines can serve as an effective policy tool for changing the behaviors of key regional actors.