Determinants of Insecticide Treated Nets (ITNs) Ownership and Use in Ghana 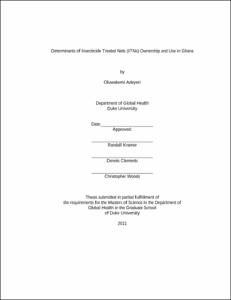 Malaria is hyper-endemic in Ghana, and remains one of the leading causes of morbidity and mortality, especially in pregnant women and children under the age of five. The use of insecticide-treated nets is an effective intervention for malaria control; however, despite known evidence of its efficacy, there is still a low rate of implementation and usage. Considering the significant public health impact to be gained from proper use of ITNs, it is worthwhile to study factors that determine ownership of ITNs in Ghana. Cross-sectional data from the Demographic and Health Surveys (DHS) for Ghana in 2008 was analyzed to determine which variables were predictors of ITN ownership. Additional semi-structured interviews were also conducted to explore these variables. Approximately 33% of Ghanaian households own at least one ITN. The strongest positive predictors of ITN ownership were number of children <5 years (52%) and residence in a rural area (47%). Marital status and birth in the last five years were also positive predictors, 48% and 56% respectively Electricity in the household was found to be a negative predictor (28%), while wealth was not a significant predictor. Consequently, there is the need for increased targeted government interventions towards groups that are less likely to own bed nets - urban areas, low level of education. It is also paramount that already existing interventions that target risk groups - young children and pregnant women are continued to ensure continued reduction in the global burden of malaria.