The Design of a Micro-turbogenerator 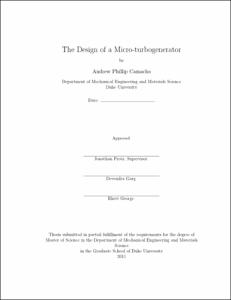 The challenges that have affected micro-turbogenerators in the past are presented. Two of the most important challenges are the efficiency of micro-turbomachinery and the power transfer capabilities of micro-generators.

The basic operating principles of turbomachinery are developed with emphasis on the different mechanisms of energy transfer and how the ratio of these mechanisms in a turbine design relates to efficiency. Loss models are developed to quantify entropy creation from tip leakage, trailing edge mixing, and viscous boundary layers over the surface of the blades. The total entropy creation is related to lost work and turbine efficiency. An analysis is done to show turbine efficiency and power density as a function of system parameters such as stage count, RPM, reaction, and size. The practice of multi-staging is shown to not be as beneficial at small scales as it is for large scales. Single stage reaction turbines display the best efficiency and power density, but require much higher angular velocities. It is also shown that for any configuration, there exists a peak power density as a result of competing effects between the scaling laws and viscous losses at small sizes.

Models are presented for planar micro-generators to determine output voltage,internal resistance, electrical losses, and electromagnetic losses as a function of geometry and key design parameters. A 3 phase multi-layer permanent magnet generator operating at 175,000 RPM with an outer diameter of 1 cm is then designed. The device is shown to operate at an efficiency of 64\%. A second device is designed using improved geometries and system parameters and operates at an efficiency of 93%.

Lastly, an ejector driven turbogenerator is designed, built, and tested. A thermodynamic cycle for the system is presented in order to estimate system efficiency as a function of design parameters. The turbo-generator was run at 27,360 RPM and demonstrated a DC power output of 7.5 mW.