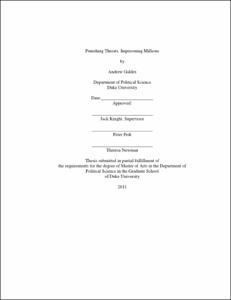 This thesis seeks to determine whether the federal criminal law has been used increasingly in the past several decades to punish conduct that poses a general threat to society, rather than conduct that causes a concrete harm to a particular victim. It situates this question within a broader discussion of criminal punishment in the United States, including rising incarceration rates, the theoretical justifications for punishment, and important legal limitations on its exercise.

To determine whether the federal criminal law has been used increasingly to punish threats, this thesis charts the enforcement of twenty main categories of federal crimes over the past forty years. It gathers and organizes data on criminal case filings published yearly by the U.S. Department of Justice and the Administrative Office of the U.S. Courts. After calculating the trend of enforcement for each crime, it groups the twenty crimes into three categories based on whether the prohibited conduct constitutes a concrete harm versus a general threat of harm.