The Role of Social Science in Judicial Decision Making 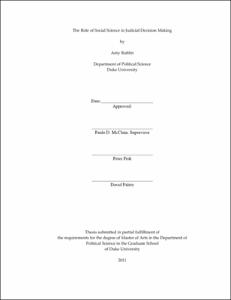 This thesis explores the intersection of social science and judicial decision making. It examines to what extent, and in what contexts, judges utilize social science in reaching and bolstering their rulings. The thesis delves into three areas of law that are typically not grouped together--integration, gay rights, and capital punishment--in order to see the similarities and differences in the use of empirical findings. Analyzing the language in judicial opinions from family courts, district courts, circuit courts, and the United States Supreme Court enabled the emergence of trends. The opinions revealed that inconsistency in the use of social science may stem from how a given issue is framed, the tide of public opinion on an issue, and whether social science in that realm is settled or not. Application of these principles to the gay rights context suggests that if the Supreme Court were to hear a case on gay marriage, a national consensus on the issue would be more outcome-determinative than settled social science.