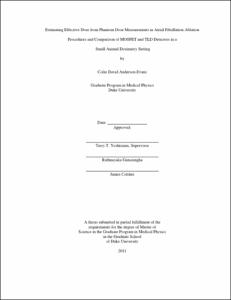 Atrial Fibrillation (AF) is an ever increasing health risk in the United States. The most common type of cardiac arrhythmia, AF is associated with increased mortality and ischemic cerebrovascular events. Managing AF can include, among other treatments, an interventional procedure called catheter ablation. The procedure involves the use of biplane fluoroscopy during which a patient can be exposed to radiation for as much as two hours or more. The deleterious effects of radiation become a concern when dealing with long fluoroscopy times, and because the AF ablation procedure is elective, it makes relating the risks of radiation ever more essential.

This study hopes to quantify the risk through the derivation of dose conversion coefficients (DCCs) from the dose-area product (DAP) with the intent that DCCs can be used to provide estimates of effective dose (ED) for typical AF ablation procedures. A bi-plane fluoroscopic and angiographic system was used for the simulated AF ablation procedures. For acquisition of organ dose measurements, 20 diagnostic metal-oxide-silicon field effect transistor (MOSFET) detectors were placed at selected organs in a male anthropomorphic phantom, and these detectors were attached to 4 bias supplies to obtain organ dose readings. The DAP was recorded from the system console and independently validated with an ionization chamber and radiochromic film. Bi-plane fluoroscopy was performed on the phantom for 10 minutes to acquire the dose rate for each organ, and the average clinical procedure time was multiplied by each organ dose rate to obtain individual organ doses. The effective dose (ED) was computed by summing the product of each organ dose and the corresponding tissue weighting factor from the ICRP publication 103. Further risk calculations were done according to the BEIR VII Phase 2 report to obtain relative and lifetime attributable risks of cancer for an average AF ablation procedure.

The ED was computed separately for the biplane fluoroscopic and angiographic system's `low' and `normal fluoro' automated settings, yielding 27.9 mSv and 45.6 mSv respectively for an average procedure time of88.1 minutes. The corresponding DAP was 48.7 Gy cm2 and 79.1 Gy*cm2 for low and normal settings respectively. The independently measured DAP was found to be within 0.1 % of that measured by the fluoroscopy system's onboard flat panel detectors. DCCs were calculated to be 0.573 and 0.577 for the respective low and normal settings. The results proved to be very closely matched, which was to be expected. However, the results are higher than some other published DCCs for the same type of procedure. The calculated cancer risks were fairly low due to the age of most patients (less than 5 excess incidents of cancer per 100,000 exposed for stomach colon liver; incidence of lung cancers estimated at 130-300 per 100,000 exposed), but concern remains that longer procedures could increase the risk of erythema or other serious skin injuries.

The second section of this thesis study involves the quantification and distribution of radiation dose in small animals undergoing irradiation in a orthovoltage x-ray unit. Extensive research is being done with small animals, particularly mice and rats, in fields such as cancer therapy, radiation biology and radiological countermeasures. Results and conclusion are often drawn from research based solely on manufacturer's specifications of the delivered dose rate without independent verification or adequate understanding of the machines' capabilities. Accurate radiation dose information is paramount when conducting research in this arena.

Traditional methods of dosimetry, namely thermoluminescence dosimeters (TLDs) are challenging and often time consuming. This section hopes to show that in place of TLDs, MOSFETs can provide accurate, precise dose information comparable with TLDs and ionization chambers. Measurements of all three dosimeters are compared in a small animal irradiator in phantoms and in vivo. Measurements done with MOSFETs are shown to deviate by 2.5% from that of the ADCL calibrated ionization chamber while TLDs showed a 7% deviation. Dose distributions within a phantom are also measured using radiochromic film to estimate the attenuation and show that dose is not uniform throughout the mouse. A dose decrease of approximately 30% is observed in a water phantom, which was only slightly mitigated by a hardening the beam with additional filtration. A Bland-Altman plot was created to show that the MOSFETs and TLDs used to make the dose measurements are statistically equivalent. The results show that all measurements made over a range of doses fall within 1.96 standard deviations of the mean.