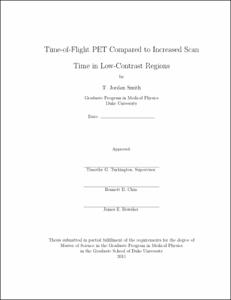 Positron Emission Tomography is a coincidence-detection-based nuclear imaging modality that has increased in clinical prevalence over the last two decades. Measures have recently been taken to improve the practice, specifically the synergistic combination with CT, and implementation of iterative reconstruction. The time-of- flight (TOF) technique is another improvement theorized early in PET development, which reduces image noise by measuring the difference in coincident photon detection times. It was difficult to implement at the time of inception because of limited technologies, but better detectors and electronics have recently made TOF feasible for clinical use. Its gain in image quality has been measured by various methods, but is difficult to quantify because of tradeoffs inherent in count-based imaging. This work set out to investigate the image quality gained with TOF imaging by determining the effective non-TOF scan time required to achieve equivalent image quality as TOF.

Methods: We used the TOF-capable GE Discovery 690 PET/CT scanner with ~600 ps timing resolution to acquire high-count list-mode data of hot spheres, cold bottles, and a novel low-contrast bead insert housed in three phantoms of increasing diameters. These data were reconstructed with and without TOF information into shorter images of 30 sec, 1, 2, 4 and 8 min, using the OS-EM reconstruction algorithm with 16 subsets and 1, 2, 3, 5 and 10 iterations each. Up to 16 replicates of each image were produced. Regions of interest were drawn on the high-count images and subsequently applied to all images in each set. These data were averaged across the replicate image sets for statistical power and were used to calculate contrast, background variability and replicate variability for regions within each phantom scan. Background variability was measured as the standard deviation of 1 cm ROI means spread throughout the background, while replicate noise was measured as the pixel deviation across replicated images. The contrast for each unique phantom region and scan time were plotted versus the two noise measures, and a unique quantification method was devised to calculate the scan time equivalent for images reconstructed with TOF versus those without.

The quantification method delivered easily interpretable results that correlated with visual and graphical evaluation. Hot spheres showed between 1.6× and 2.5× scan time gain factor, while cold bottles showed between 3.8× and 4.3× gain, when measuring background variability as the noise component. Three areas of the low- contrast insert were considered, and showed results generally lying between those of the cold and hot inserts, with one exception demonstrating 9.15× and 10.35× gains for the background and replicate variability measures, respectively.

Trends were observed in several aspects of these results that may subjugate TOF quality gain even further. Cold areas recover better than hot lesions, as expected, but low-contrast areas show varying levels of TOF improvement, and tend to lie between those demonstrated for hot and cold regions.

Finally, similar results were found when considering background variability and replicate variability noise measures, which can be considered further validation of the image quality results.