Cell-Surface GRP78 and its Antibodies: Pathologic and Therapeutic Roles in Cancer 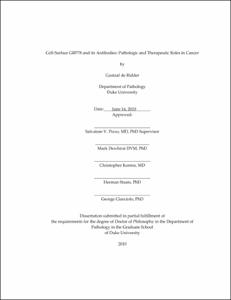 The chaperone protein GRP78 is primarily expressed in the endoplasmic reticulum, but it is also aberrantly expressed on the surface of cells under pathological conditions. One the cell membrane, GRP78 acts as a signaling molecule with unique properties. The amino-terminal domain acts as a growth factor receptor-like protein, while the carboxyl-terminal domain functions as a death-signaling receptor-like protein to extrinsically induce apoptosis. Autoantibodies that react with cell-surface GRP78 on many tumor cell lines occur in the sera of patients with prostate cancer, melanoma, and ovarian cancer. These autoantibodies are a negative prognostic factor in prostate cancer and melanoma, and when purified, stimulate tumor cell proliferation in vitro. It is unclear, however, whether these IgGs are merely a biomarker, or if they actually promote tumor growth in vivo. We immunized C57Bl/6 mice with recombinant GRP78 and then implanted the B16F1 murine melanoma cell line as flank tumors. We employed the antisera from these mice for in vitro cell signaling and proliferation assays. The immunodominant epitope in human cancer patients was well represented in the antibody repertoire of these immunized mice. We observed significantly accelerated tumor growth, as well as shortened survival in GRP78-immunized mice as compared to controls. Furthermore, antisera from these mice, as well as purified anti-GRP78 IgG from similarly immunized mice, stimulate Akt phosphorylation and proliferation in B16F1 and human DM6 melanoma cells in culture. These studies demonstrate a causal link between a humoral response to GRP78 and the progression of cancer in a murine melanoma model. They support the hypothesis that such autoantibodies are involved in the progression of human cancers and are not simply a biomarker. Because GRP78 is present on the surface of many types of cancer cells, this hypothesis has broad clinical and therapeutic implications.

We examined the effect of these three mAbs on the growth of B16 flank tumors. N88 accelerated and C107 slowed tumor growth, while C38 had no net effect. We are currently developing these antibodies and derivatives thereof as therapeutics for melanoma as well as for cancers of the brain, breast, ovary, and prostate. In fact, any tumor cell that over-expresses GRP78 on its surface is a potential therapeutic target for our future studies.