Glucose metabolism and p53 in leukemia 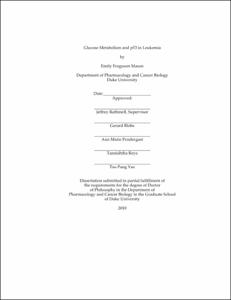 Healthy cells require input from growth factor signaling pathways to maintain cell metabolism and survival. Growth factor deprivation induces a loss of glucose metabolism that contributes to cell death in this context, and we have previously shown that maintenance of glycolysis after growth factor deprivation suppresses the activation of p53 and the induction of the pro-apoptotic protein Puma to prevent cell death. However, it has remained unclear how cell metabolism regulates p53 activation and whether this increased glycolysis promotes cell survival in the face of additional types of cell stress. To examine these questions, we have utilized a system in which stable overexpression of the glucose transporter Glut1 and hexokinase 1 in hematopoietic cells drives growth-factor independent glycolysis. This system allows us to examine the effects of glucose metabolism in the absence of other signaling events activated downstream of growth factor receptors. Here, we demonstrate that elevated glucose metabolism, characteristic of cancer cells, can suppress PKC&#948;-dependent p53 activation to maintain cell survival after growth factor withdrawal. In contrast, DNA damage-induced p53 activation was PKC&#948;-independent and was not metabolically sensitive. Both stresses required p53 serine 18 phosphorylation for maximal activity but led to unique patterns of p53 target gene expression, demonstrating distinct activation and response pathways for p53 that were differentially regulated by metabolism.

Unlike the growth factor-dependence of normal cells, cancer cells can maintain growth factor-independent glycolysis and survival and often demonstrate dramatically increased rates of glucose uptake and glycolysis, in part to meet the metabolic demands associated with cell proliferation. Given the ability of elevated glucose metabolism to suppress p53 activity in the context of metabolic stress, we examined the effect of increased glucose uptake on leukemogenesis using a mAkt-driven model of leukemia and adoptive transfer experiments. We show here that elevated glucose uptake promoted leukemogenesis in vivo, perhaps through suppression of p53 transcriptional activity. During the process of leukemogenesis, cancerous cells can acquire growth factor independent control over metabolism and survival through expression of oncogenic kinases, such as BCR-Abl. While targeted kinase inhibition can promote cancer cell death, therapeutic resistance develops frequently and further mechanistic understanding regarding these therapies is needed. Kinase inhibition targets the necessary survival signals within cancerous cells and may activate similar cell death pathways to those initiated by growth factor deprivation. As we have demonstrated that loss of metabolism promotes cell death after growth factor withdrawal, we investigated whether cell metabolism played a role in the induction of apoptosis after treatment of BCR-Abl-expressing cells with the tyrosine kinase inhibitor imatinib. Consistent with oncogenic kinases acting to replace growth factors, treatment of BCR-Abl-expressing cells with imatinib led to reduced metabolism and p53- and Puma-dependent cell death. Accordingly, maintenance of glucose uptake inhibited p53 activation and promoted imatinib resistance, while inhibition of glycolysis enhanced imatinib sensitivity in BCR-Abl-expressing cells with wild type p53 but had little effect on p53 null cells. Together, these data demonstrate that distinct pathways regulate p53 after DNA damage and metabolic stress and that inhibition of glucose metabolism may enhance the efficacy of and overcome resistance to targeted molecular cancer therapies.