Microbial Phosphorus Cycling and Community Assembly in Wetland Soils and Beyond 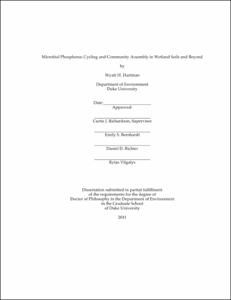 Although microbes may strongly influence wetland phosphorus (P) cycling, specific microbial communities and P metabolic processes have not been characterized in wetlands, and microbial P cycling is poorly understood across global ecosystems, especially in soils. The goal of this work is to test the effects of stress and growth factors on microbial communities in wetlands, and on microbial P metabolism and P cycling at ecosystem scales in wetland soils and beyond. I conducted field and laboratory research experiments in wetland soils, which by definition lie along gradients between terrestrial and aquatic ecosystems, and I explicitly compared results in wetlands to adjacent ecosystems to improve inference and impact.

To test relationships between microbial communities, soil stress and resource supply, I compared the distribution and abundance of uncultured bacterial communities to environmental factors across a range of wetland soils including a well-characterized P enrichment gradient, and restoration sequences on organic soils across freshwater wetland types. The strongest predictor of bacterial community composition and diversity was soil pH, which also corresponded with the abundance of some bacterial taxa. Land use and restoration were also strong predictors of bacterial communities, diversity, and the relative abundance of some taxonomic groups. Results from wetland soils in this study were similar to both terrestrial and aquatic ecosystems in the relationship of pH to microbial communities. However, patterns of biogeography I observed in wetlands differed from aquatic systems in their poor relationships to nutrient availability, and from terrestrial ecosystems in the response of microbial diversity to ecosystem restoration.

To evaluate relationships between microbial P metabolism and growth, I compared concentrations of P in soil microbial biomass with the soil metabolic quotient (qCO2) by compiling a large-scale dataset of the carbon (C), nitrogen (N) and P contents of soils and microbial biomass, along with C mineralization rates across global wetland and terrestrial ecosystems (358 observations). The ratios of these elements (stoichiometry) in biomass may reflect nutrient limitation (ecological stoichiometry), or be related to growth rates (Biological Stoichiometry). My results suggest that the growth of microbial biomass pools may be limited by N availability, while microbial metabolism was highly correlated to P availability, which suggests P limitation of microbial metabolism. This pattern may reflect cellular processes described by Biological Stoichiometry, although microbial stoichiometry was only indirectly related to respiration or metabolic rates. I found differences in the N:P ratios of soil microbial biomass among ecosystems and habitats, although high variation within habitats may be related to available inorganic P, season, metabolic states, or P and C rich energy storage compounds. Variation in microbial respiration and metabolic rates with soil pH suggests important influences of microbial communities and their responses to stress on metabolism and P cycling.

My dissertation research represents early contributions to the understanding of microbial communities and specific processes of microbial P metabolism in wetlands, including PolyP accumulation and Biological Stoichiometry, which underpin microbial cycling of P and C. Together, my research findings broadly indicate differences in microbial P metabolism among habitats in wetlands and other ecosystems, which suggests the prevailing paradigm of uniform P cycling by microbes will be inadequate to characterize the role of microbes in wetland P cycling and retention. While I observed some concomitant shifts in microbial communities, PolyP accumulation, and microbial stoichiometry with soil pH, land use, and habitat factors, relationships between specific microbial groups and their P metabolism is beyond the scope of this work, but represents an exciting frontier for future research studies.