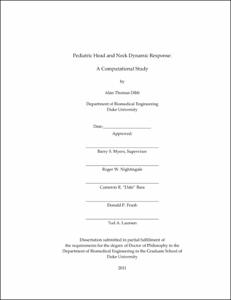 Traumatic injuries are the leading cause of death to children between the ages of one to nineteen years in the United States. The primary source of these traumatic injuries is motor vehicle traffic, with the head being the primary region of the body to suffer injury. While the pediatric neck is also prone to injury, it is particularly notable since it governs head excursion and acceleration, thus influencing head impacts and injuries. Pediatric fatalities can be prevented through safety improvements to vehicle compartments and child restraints by way of advanced biofidelic pediatric anthropomorphic testing devices (ATDs) and a more complete understanding of pediatric biomechanics. Computer models of the pediatric head and neck provide a valuable tool to combine results from pediatric postmortem human specimen (PMHS), radiological, and human volunteer studies to investigate the dynamics of the pediatric head and neck. The current study produced the first validated computer model of the pediatric head and neck which were created using the framework of a validated adult model. Radiology studies were conducted to determine pediatric cervical muscle cross sectional areas, vertebral anthropometry, and vertebral inertial properties. The results of these studies were combined with available pediatric PMHS properties to create the six and ten year old models. The models were validated against pediatric volunteer low speed frontal impacts and were then used to simulate higher rate and injurious inducing loading scenarios. The six and ten year old flexion bending stiffnesses were found to be 36% and 45% of the adult bending stiffness, respectively. The pediatric tensile stiffnesses were found to be 67% and 76% of the adult tensile stiffness. The tensile failure tolerance of the six year old was between 1490 and 2300 N and of the ten year old between 2040 and 3170 N. The adult and pediatric Hybrid III ATDs were found to be on average 2.5 times stiffer in flexion bending than the computer models. Biofidelity corridors were created with the models to be used to guide future ATD designs. Overall, the pediatric models provide a general tool that can be used to assess the safety of children during motor vehicle crashes.