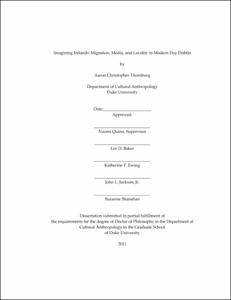 This dissertation explores the place of Irish-Gaelic language (Gaeilge) television and film media in the lives of youths living in the urban greater Dublin metropolitan area in the Republic of Ireland. By many accounts, there has been a Gaeilge renaissance underway in recent times. The number of Gaeilge-medium primary and secondary schools (Gaelscoileanna) has grown throughout the 1990s and into the twenty-first century, the year 2003 saw the passage of the Official Languages Act (laying the groundwork to assure all public services would be made available in Gaeilge as well as English), and as of January 2007 Gaeilge has become a working language of the European Union. Importantly, a Gaeilge television station (TG4) was established in 1996. This development has increased the amount of Gaeilge media significantly, and that television and film media is increasingly being utilized in Gaeilge classrooms.

The research for this dissertation was based on a year of fieldwork conducted in Dublin, Ireland. The primary methodology was semi-structured interviews with teenage second-level-school students who were enrolled in compulsory Gaeilge classes at two schools in the greater Dublin area. Simultaneous examination of social discourses, in the form of prevalent television and film media, and the talk of the teenage students I interviewed led me to discern a "locality production" process that can be discerned in both these forms of discourse. While it is noted that this process of locality production may be present anywhere, it is suggested that it may be particularly pronounced in Ireland as a result of a traditional emphasis on "place" on the island.

This dissertation thus makes a contribution to Irish and Media Studies through an analysis of Gaeilge cultural productions in the context of increased effects of globalization on the lives of the youth with whom I did my research. Additionally, this dissertation contributes to an on-going critique of identity-based theorizations through contribution of an alternative framework.