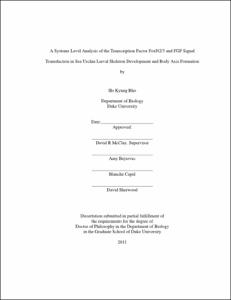 Specification and differentiation of a cell is accomplished by changing its gene expression profiles. These processes require temporally and spatially regulated transcription factors (TFs), to induce the genes that are necessary to a specific cell type. In each cell a set of TFs interact with each other or activate their targets; as development progresses, transcription factors receive regulatory inputs from other TFs and a complex gene regulatory network (GRN) is generated. Adding complexity, each TF can be regulated not only at the transcriptional level, but also by translational, and post-translational mechanisms. Thus, understanding a developmental process requires understanding the interactions between TFs, signaling molecules and target genes which establish the GRN.

In this thesis, two genes, FoxN2/3, a TF and FGFR1, a component of the FGF signaling pathway are investigated. FoxN2/3 and FGFR1 have different mechanisms that function in sea urchin development; FoxN2/3 regulates gene expression and FGFR1 changes phosphorylation of target proteins. However, their ultimate goals are the same: changing the state of an earlier GRN into the next GRN state.

First, we characterize FoxN2/3 in the primary mesenchyme cell (PMC) GRN. Expression of foxN2/3 begins in the descendants of micromeres at the early blastula stage; and then is lost from PMCs at the mesenchyme blastula stage. foxN2/3 expression then shifts to the secondary mesenchyme cells (SMCs) and later to the endoderm. Here we show that, Pmar1, Ets1 and Tbr are necessary for activation of foxN2/3 in the descendants of micromeres. The later endomesoderm expression is independent of the earlier expression of FoxN2/3 in micromeres and independent of signals from PMCs. FoxN2/3 is necessary for several steps in the formation of larval skeleton. A number of proteins are necessary for skeletogenesis, and early expression of at least several of these is dependent on FoxN2/3. Furthermore, knockdown (KD) of FoxN2/3 inhibits normal PMC ingression. PMCs lacking FoxN2/3 protein are unable to join the skeletogenic syncytium and they fail to repress the transfating of SMCs into the skeletogenic lineage. Thus, FoxN2/3 must be present for the PMC GRN to control normal ingression, expression of skeletal matrix genes, prevention of transfating, and control fusion of the PMC syncytium.

Second, we show that the FGF-FGFR1 signaling is required for the oral-aboral axis formation in the sea urchin embryos. Without FGFR1, nodal is induced in all of the cells at the early blastula stage and this ectopic expression of nodal requires active p38 MAP kinase. The loss of oral restriction of nodal expression results in the abnormal organization of PMCs and the larval skeleton; it also induces ectopic expression of oral-specific genes and represses aboral-specific genes. The abnormal oral-aboral axis formation also affected fgf and vegf expression patterns; normally these factors are expressed in two restricted areas of the ectoderm between the oral and the aboral side, but when FGFR1 is knocked down, Nodal expands, and in response the expression of the FGF and VEGF ligands expands, and this in turn affects the abnormal organization of larval skeleton.