The Role of Gz in Neuron Development and CNS Biology 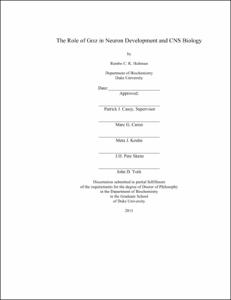 <p>Heterotrimeric G proteins play invaluable roles in cellular processes involving transmembrane signaling, particularly at sites of neuronal connectivity within the central nervous system (CNS). G&alpha;z is a member of the G&alpha;i subfamily of heterotrimeric G proteins that displays unique biochemical characteristics and is primarily expressed in neuronal and neuroendocrine cells. Studies in Gz&ndash;null mice over the past decade reveal that Gz significantly impacts responses to psychoactive drugs, and is capable of coupling to D2 dopamine, 5&ndash;HT1A serotonin, &mu;&ndash;opioid, and &alpha;2A&ndash;adrenergic receptors. These studies have suggested that Gz may play a critical role in diseases and disorders involving disruptions of monoamine neurotransmitter signaling in the brain such as depression, anxiety, drug abuse, ADHD, schizophrenia, drug addiction, and pain sensitivity. Much is still unknown about the roles and mechanisms of action of Gz in biology.

<p>In this thesis, I have built on what is known regarding G&#945;z biochemistry by conducting a series of studies that provide further understanding of its role in the CNS, particularly in neuronal development and seizure susceptibility. Gz interacts with several proteins that act as regulators and effectors: RGSZ, adenylyl cyclase, EYA2, and Rap1GAP being the best characterized. A finding regarding its impact of Gz on neurotrophin signaling through RAP1GAP in particular has led to much of the work described here. The studies presented in this thesis indicate that G&alpha;z inhibits BDNF-stimulated axon growth in cortical neurons, establishing an endogenous role for G&alpha;z in regulation of neurotrophin signaling in the CNS that may have important implications for development and plasticity. Furthermore, G&alpha;z was shown to be uniquely distributed to synaptic vesicles suggesting that one mechanism underlying Gz biology may be the regulation of vesicle loading, docking, or release. Finally, I demonstrate that Gz-null mice are hypersusceptible to pilocarpine&ndash;induced seizures, and provide histology data indicating increased levels of zinc in the hippocampus. Taken together, these findings suggest that Gz plays a regulatory role at the intersection of neurotrophin and GPCR signaling in the CNS.