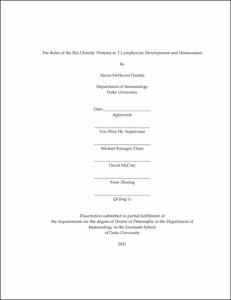 Throughout their development in the thymus and during their maintenance and the immunological response in the periphery, T cells rely on the regulation of classical apoptotic pathways to promote cell survival or death. Several proteins of the Bcl-2 family have been shown to be critical in thymocyte and T cell survival and consequently, in T cell function. Among these proteins, the antiapoptotic proteins Bcl-2 and Mcl-1 are critical for promoting T cell survival at multiple stages of the T cell "life cycle." While these proteins have been reported to interact with several of the proapoptotic members of the Bcl-2 family, the specific interactions by which Mcl-1 in particular promotes T cell survival in vivo were not well understood. Further, how different stimuli (for example, cytokine signaling and T cell activation) modulate the specific functions of Mcl-1 had also not been thoroughly explored.

We utilized mouse models to dissect the roles of Mcl-1 at multiple stages of T cell development and function. We utilized conditional knockout and double knockout strategies to build genetic pathways for Mcl-1 activity during thymocyte development and in peripheral T cells under a variety of conditions. In the thymus, the major role of Mcl-1 is to inhibit the activity of proapoptotic Bak because the loss of Bak, but not the loss of Bax or Bim, rescued the survival of Mcl-1-deficient thymocytes at both the double negative and single positive stages. Further, we concluded that this role is not shared with Bcl-2 because overexpression of Bcl-2 did not rescue DN or SP survival.

In peripheral T cells, the loss of Bak rescued T cell survival in the presence of IL 7, but not during conditions of cytokine withdrawal. Interestingly, the overexpression of Bcl-2 or the loss of Bim partially rescued the survival of T cells during cytokine withdrawal, indicating that Mcl-1 has dual roles in T cells: cytokine-dependent and cytokine independent. Additionally, we found that cytokines of the common gamma chain family have different effects on the activity of Mcl-1 due to the differential regulation of other proteins of the Bcl-2 family, most notably Bim.

Finally, we utilized a Bcl-2 reporter mouse model to examine the role of Bcl-2 in the establishment of CD8+ T cell memory to infection. Although it is known that Bcl-2 is dynamically regulated in response to activation, the importance of this regulation in the establishment of T cell memory is not yet clear. We show that a subset of effector T cells within a previously defined memory precursor population retained high Bcl-2 expression at the peak of the immune response. Using adoptive transfer of sorted effector T cells, we provide preliminary evidence that the cells with memory potential lie within a strict range of Bcl-2 expression. These studies indicate that the regulation of Bcl 2 is likely critical in establishing T cell memory and provide a platform for the future study of the factors that influence T cell memory.