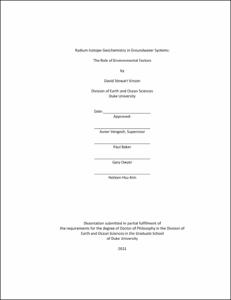 Prior studies of groundwater systems have associated increasing salinity and anoxic conditions with increasing radium (Ra) activities in water due to the decreasing effectiveness of Ra removal processes. However, the components of salinity (e.g. Ca vs. Na and SO42- vs. Cl--dominated waters), and the relative importance of salinity-sensitive vs. redox-sensitive processes for Ra mobilization, are less well understood. In this research, the response of Ra to hydrochemical change was examined using a multiple tracer approach to obtain detailed information on divalent cation and Ra mobility. A range of salinity and redox conditions was examined in five field-based studies in the United States and Morocco: (1) fresh waters in fractured crystalline rocks in the Piedmont region of North Carolina; (2) the Willcox Basin, an oxic alluvial basin-fill aquifer in southeastern Arizona; (3) the Jordan sandstone aquifer, a carbonate-cemented quartz sandstone in southeastern Minnesota; (4) an unconfined coastal aquifer undergoing salinization in the city of Agadir, Morocco; and (5) the confined, fresh to saline Cretaceous and Pliocene aquifers of the Atlantic Coastal Plain in North Carolina.

In addition to analysis of major element concentrations, trace metal concentrations, and 224Ra, 226Ra, and 228Ra activities, complementary isotope systems were applied to gain insights on the relative stability of chemical processes that remove radium and other alkaline earth metals: (1) strontium isotope ratios (87Sr/86Sr) trace divalent cation release from sources such as clay and carbonate minerals in the aquifer solids and also indicate conditions in which divalent cation release (rather than uptake) is dominant; (2) boron concentrations and isotopes (&delta;11B) coincide with the opposite condition in freshening conditions of the Atlantic Coastal Plain, in which divalent cations are removed in exchange for Na; and (3) sulfur and oxygen isotopes (&delta;34S, &delta;18O) of sulfate trace sulfate sources and provide information on sulfate-reducing conditions, which can inhibit barite (BaSO4) from removing Ra by coprecipitation. In addition, other isotopic and ion measurements trace salinity sources and groundwater residence time, including &delta;2H, &delta;18O, 3H, Br-/Cl-, Na/Cl-, and Ca/Na.

This dissertation documents correlations between salinity and radium in the brackish to saline North Carolina coastal plain aquifer with total dissolved solids (TDS) up to ~18,000 mg L-1 and to some degree in the Moroccan coastal aquifer, but even the lower-salinity waters (TDS <3000 mg L<sup>-1</sup>) exhibit a range of Ra activities spanning approximately 3 orders of magnitude. Among these low-TDS waters, the highest Ra activities were observed in the anoxic Jordan sandstone aquifer and the lowest were observed in the oxic Willcox Basin aquifer. Although the main control on radium activities in fresh groundwater is the U- and Th-series radionuclide content of the aquifer solids, important secondary controls include the stability of redox-sensitive radium adsorption sites (Mn and Fe oxides), the relative dominance of divalent vs. monovalent cations (e.g. the Ca/Na ratio), formation of the uncharged RaSO40 complex, and/or the saturation state with respect to barite. These processes interact in varied ways in the field-based studies. Increasing radium activities and decreasing 222Rn/226Ra ratios in the North Carolina fractured crystalline rock groundwater system are correlated with increasing Ba, Mn, and Fe concentrations and decreasing dissolved oxygen concentrations, related to weathering and/or organic carbon oxidation. Radium activities in the oxic, neutral to slightly basic Willcox Basin are very low (median 226Ra activity 2 mBq L-1), probably due to a combination of effective Ra removal processes including adsorption to Mn and/or Fe oxides and the overall removal of divalent cations during groundwater evolution in this system. These are the same surface charge conditions that release arsenic, of regional water concern, in this pH range. Radium in Jordan aquifer groundwater is dependent on local variations in solid-phase radionuclide levels, probably hosted in the carbonate cement phase. Also, Ra is inefficiently adsorbed to the aquifer solids in the aquifer's anoxic conditions, resulting in the highest radium levels reported in this dissertation (226Ra up to 420 mBq L-1) despite apparent barite precipitation that partially removes Ra. Radium-224 activity in the Moroccan coastal aquifer is associated with salinity, but Ra overall is apparently controlled by barite, indicated by conditions near BaSO4 saturation. Radium activity in the saline waters of the Atlantic Coastal Plain aquifers is associated with TDS concentrations, but the cation exchange properties of the aquifer may provide a major mechanism of Ra removal in the Na-HCO3- and Na-Cl- waters. Overall, the complex interaction between groundwater chemistry and Ra-removing processes implies that in waters with TDS below approximately 3,000 mg L-1, dissolved solids concentration alone does not fully describe radium's response to hydrochemical conditions, but rather that aquifer-specific examination of Ra removal mechanisms is needed.