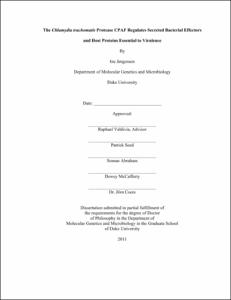 <italic>Chlamydia<italic> <italic>trachomatis<italic> remains a highly relevant clinical pathogen as it is the causative agent of the most commonly reported sexually transmitted disease in the western hemisphere, and the most common cause of infectious blindness in the developing world. As an obligate intracellular pathogen, <italic>Chlamydia<italic> employs a vast assay of virulence proteins to hijack and remodel the host cellular machinery to facilitate its growth and dissemination. Besides delivering effector proteins into the host cytoplasm via a conserved type III secretion machinery, Chlamydia encodes components of multiple secretion systems, such as type II and IV. Chapter 3 of this document describes the secretion, processing and localization of two putative autotransporters (Pls1 and Pls2) and their involvement in inclusion expansion.

In recent years, many new chlamydial effector proteins have been described. CPAF (Chlamydial Protease-like Activity Factor) is a secreted serine protease that is emerging as a central virulence protein: it is proposed to play a central role in <italic>Chlamydia<italic> pathogenesis by cleaving proteins involved in antigen-presentation, apoptosis and cytoskeletal re-arrangements. However, the functional significance of CPAF remains elusive due to the lack of specific inhibitors and <italic>Chlamydia<italic> mutants. The body of work presented herein demonstrates that in addition to targeting host proteins, CPAF cleaves a subset of early chlamydial effector proteins, including Inc-proteins that reside on the nascent pathogenic vacuole ("inclusion"). The design and development of a CPAF-specific inhibitory peptide demonstrates that these chlamydial effector proteins are true targets of CPAF. This peptide reversed the cleavage of bacterial targets by CPAF both in an in vitro cleavage assay and during infection, indicating that these effectors are bona fide targets. Inhibition of CPAF activity also revealed that this protease regulates multiple facets of chlamydial pathogenesis. CPAF inhibition in infected epithelial cells led to the complete dismantling of the inclusion, secretion of pro-inflammatory cytokines and engagement of an inflammasome-dependent programmed cell death pathway. While fibroblasts defective in various inflammasome components were resistant to <italic>Chlamydia<italic>-induced cell death, inclusion integrity and bacterial replication was still compromised upon CPAF inhibition, indicating that loss of inclusion integrity was not a consequence of caspase-1 activation. Overall, these findings revealed that CPAF, in addition to regulating host function, directly modulates the activity of secreted effectors and early Inc-proteins. Furthermore, we establish that CPAF is an essential virulence factor that is required to maintain the integrity of the inclusion and prevent the engagement of innate immune programmed cell death pathways in infected epithelial cells. CPAF activity thus remains a compelling mechanism by which intracellular pathogens employ proteolytic events to modify the host environment.