Will the Timing of Temperate Deciduous Trees' Budburst and Leaf Senescence Keep up with a Warming Climate? 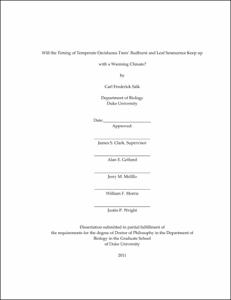 Recent changes in the timing of annual events are a sign that climate change is already impacting ecosystems. Carbon sequestration by forests increases with longer growing seasons. Biodiversity can be affected by mis-timing of events through shading interactions and frost damage. Projecting forests' ability to provide these ecosystem services in the future requires an understanding of trees' phenological responses to a new climate. I begin by proposing a first order definition of an `optimal' phenological response to warming: that the mean temperature following budburst should remain essentially constant. Analogously, the temperature preceding senescence can serve the same role.

To understand which environmental cues will drive future changes in phenology, I assimilate clues from observational and experimental literature. For budburst in woody plants, spring warmth, over-winter chilling and light drive nearly all behavior, but species' responses vary widely. Species using chilling or light as safety mechanisms against budburst during mid-winter thaws are thought to be less able to phenologically track a warming climate. However, I show that even species cued solely by spring warmth are likely to under-track temperature changes. Fall cues are more idiosyncratic, and a plant's driver of senescence is likely to vary from year to year.

Models are a tempting method to untangle species budburst cues and forecast phenology under warmer climate scenarios. I tested two models' ability to recover parameters used to simulate budburst data. The simpler model was cued only by spring warmth while the complex one modulated warmth requirements with chilling exposure. For the simple model, parameters could be recovered consistently from some, but not all, regions of parameter space. The complex model's parameters were largely unrecoverable. To understand the consequences of parameter uncertainty, I applied both models to an 18 year phenological record of 13 deciduous tree species. While a few species fell into identifiable regions of the simple model's parameter space, most did not, and projected budburst dates had wide parameter-derived uncertainty intervals. These bands were wider still under a 5°C warming scenario. Even greater uncertainty resulted from the complex model.

To better understand plants' potential for growing season extension I subjected seedlings to warmer climates in a series of open-topped chambers in sites at each end of the eastern deciduous biome. Soil and air were heated to 3 or 5°C above ambient, or left unheated. For nearly all species, warming hastened budburst and germination and delayed senescence. However, these events failed to track temperature changes, happening at warmer temperatures in hotter chambers. Individual species showed a remarkable variability of all events' dates within treatments, and even within chambers. Because phenological traits are heritable, this offers a potential for evolutionary response to climate change.

This research has shown that while individual trees extend their growing seasons under warmer temperatures, they typically under-respond to the magnitude of warming, suggesting forests' capacity for increased carbon sequestration may reach a limit. However, within populations, trees vary substantially in their phenological responses, forming a possibility for evolutionarily adaptation to changing cues.