Essays in the Macroeconomics of Emerging Countries 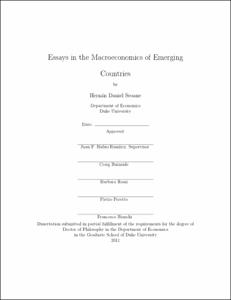 This dissertation is a collection of essays with the main objective of estimate and understand macroeconomic behavior of emerging countries by the lenses of modern tools in general equilibrium modeling.

In the first chapter, I study whether structural parameters of Small Open Economy Real Business Cycle models are constant when applied to Emerging Markets data. Using data from Argentina, I estimate a small open economy model with trend shocks and working capital constraints, augmented with time varying parameters. I find that so called ``structural" parameters suffer substantial changes in the period 1983-2008. Structural instabilities arise from both technological and financial sources. Given these findings, I inquire which are the features of the data that parameter drifts capture. I review emerging markets facts and find parameter instabilities play a key role in addressing for the variability observed in the data.

In the second chapter, I study policy changes in emerging countries. Motivated by the repeated stabilization programs implemented by emerging economies during the last 30 years, I develop a dynamic stochastic general equilibrium model with Markov-Switching to study fiscal and monetary policies in emerging economies. I estimate the model for Mexico and find strong evidence of policy changes. Two Regimes are identified. The Active Monetary Policy Regime (AMP), in which monetary and fiscal policies respond to inflation and government debt, respectively; and the Active Fiscal Policy Regime (AFP), in which fiscal policy does not respond to government debt and monetary policy does not respond to inflation. AMP holds during short periods of time after macroeconomic crises during the 80s and 90s, and for a long period after 2002. The rest of the periods, AFP is in effect. I find that switches from AFP to AMP have strong stabilization effects at the cost of high output losses. Moreover, credibility in the persistence of the regime change is key to assess the effectiveness of the stabilization program.