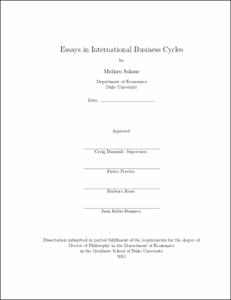 In the second chapter, I study the international transmission effects of the news about the Total Factor Productivity (TFP hereafter) of the US to the Canadian and Japanese economy. First, using the Vector Error Correction Model (VECM), the impulse responses of Canadian and Japanese macroeconomic variables to the US news shock are estimated. Next, I develop and estimate a two-country real business cycle (RBC) model with investment adjustment cost and the preference which eliminates the wealth effect on hours worked to generate booms in Canadian and Japanese variables in response to news about future US TFP. I find that international macroeconomic comovements can be generated by the news about future TFP in the US. Unlike previous studies, I show that the response of Canadian or Japanese TFP to the US news shock is important in order to generate the boom observed in the empirical analysis. Estimated value of the preference parameter indicates that eliminating the wealth effect on hours worked is important. I also show that low elasticity of substitution between domestically and foreign produced intermediate goods can also help explain the domestic boom created by the news shock, which highlights the importance of analyzing an open economy.