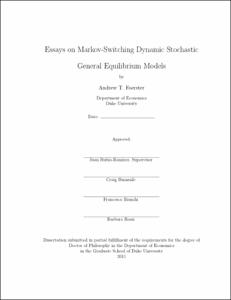 The first essay is "Perturbation Methods for Markov-Switching Models," which is co-authored with Juan Rubio-Ramirez, Dan Waggoner, and Tao Zha. This essay develops an perturbation-based approach to solving dynamic stochastic general equilibrium models with Markov-Switching, which implies that parameters governing policies or the environment evolve over time in a discrete manner. Our approach has the advantages that it introduces regime switching from first principles, allows for higher-order approximations, shows non-certainty equivalence of first-order approximations, and allows checking the solution for determinacy. We explain the model setup, introduce an iterative procedure to solve the model, and illustrate it using a real business cycle example.

The second essay considers a model with financial frictions and studies the role of expectations and unconventional monetary policy during financial crises. During a financial crisis, the financial sector has

Using this Markov Regime Switching specification, the paper addresses three issues. First, it considers the effects of different exit strategies, and shows that, after a crisis, if the central bank sells off its accumulated assets too quickly, the economy can experience a double-dip recession. Second, it analyzes the effects of expectations of intervention policy on pre-crisis behavior. In particular, if the central bank commits to always intervening during crises, there is a loss of output in pre-crisis times relative to if the central bank commits to never intervening. Finally, it considers the welfare implications of committing to intervening during crises, and shows that committing can raise or lower welfare depending upon the exit strategy used, and that committing before a crisis can be welfare decreasing but then welfare increasing once a crisis occurs.