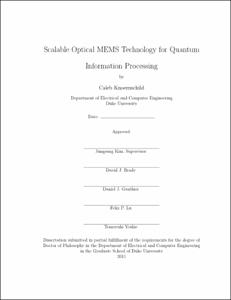 Among the various physical systems considered for scalable quantum information processing (QIP), individually trapped ions or neutral atoms have emerged as promising candidates. Recent experiments using these systems have demonstrated the basic building blocks required for a useful quantum computer. In many of these experiments, precisely tuned lasers control and manipulate the quantum bit (qubit) represented in the electronic energy levels of the ion or atom. Scaling these systems to the necessary number of qubits needed for meaningful calculations, requires the development of scalable optical technology capable of delivering laser resources across an array of ions or atoms. That scalable technology is currently not available.

In this dissertation, I will report on the development, design, characterization, and implementation of an optical beam steering system utilizing microelectromechanical systems (MEMS) technology. Highly optimized micromirrors enable fast reconfiguration of multiple laser beam paths which can accommodate a range of wavelengths. Employing micromirrors with a broadband metallic coating, our system has the flexibility to simultaneously control multiple beams covering a wide range of wavelengths.

The reconfiguration of two independent beams at different wavelengths (780 and 635 nm) across a common 5x5 array of target sites is reported along with micromirror switching times as fast as 4 us. The optical design of the system minimizes residual intensity at neighboring sites to less than 40 dB below the peak intensity. Integration of a similar system into a neutral atom QIP experiment is reported where 5 individually trapped atoms are selectively manipulated through single qubit rotations with a single laser source. This demonstration represents the first application of MEMS technology in scalable QIP laser addressing.