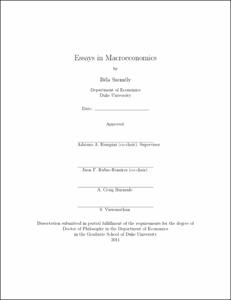 During 2007-2009 the U.S. economy experienced the most severe financial crisis since the Great Depression. Why did the financial crisis turn into such a severe recession? And what were the causes of the Great Recession? This dissertation consists of two essays examining these questions. In the first essay I study the extent to which the increase in uncertainty might have contributed to the severity of the crisis. The second essay examines the reasons behind the fall in the personal saving rate as measured in the National Income and Product Accounts.

The spendthrift nature of U.S. households leading up to the financial crisis has been cited as a major contributing factor for the Great Recession. Indeed, the personal saving rate has been falling since the end of the 1970s, dropping to as low as nearly 1 percent before the financial crisis. The reasons behind the decline in the personal saving rate have yet to be understood, and thus constituting an important puzzle for economic research. In the second essay, joint work with Maurizio Mazzocco, we provide a potential explanation for the decline in the personal saving rate. Specifically, we show that a single variable can potentially explain the decline in the U.S. personal saving rate from 10 percent in the early eighties to nearly 1 percent in 2007. This variable is medical expenditure by health institutions net of the employers' contributions to pension and insurance funds. Furthermore, if we differentiate between contributions to pension funds and to health plans, we find that the main reason behind the dramatic reduction in the U.S. personal saving rate is the stagnation of employers' contributions to pension funds that started in the early eighties combined with the sharp rise in expenditure by health institutions.