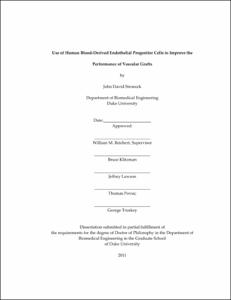 Synthetic small diameter vascular grafts fail clinically due to thrombosis and intimal hyperplasia. The attachment of endothelial cells (ECs) onto the inner lumen of synthetic small diameter vascular grafts can improve graft patency; however, significant challenges remain that prevent wide clinical adoption. These issues include difficulties in the autologous sourcing of ECs, the lack of attachment, growth and retention of the layer of ECs to the graft lumen, and the maintenance of an anti-thrombotic and anti-inflammatory profile by the layer of ECs.

This dissertation describes the isolation, characterization, and use of endothelial progenitor cells (EPCs) to improve the performance of small diameter vascular grafts. First, EPC isolation efficiency and expression of critical EC markers was compared between young healthy volunteers and patients with documented coronary artery disease (CAD). EPCs were isolated and expanded from patients with CAD and had a similar phenotype to EPCs isolated from healthy donors, and a control population of human aortic ECs. Second, we assessed the ability to enhance the anti-thrombotic activity of patient derived EPCs through the over expression of thrombomodulin (TM). In vitro testing showed TM-transfected EPCs had significantly increased production of key anti-thrombotic molecules, reduced platelet adhesion, and extended clotting times over untransfected EPCs. Finally, native and TM-transfected EPCs were seeded onto small diameter vascular grafts and tested for their ability to improve graft performance. EPCs sodded onto the lumen of small diameter ePTFE vascular grafts had strong adhesion and remained adherent during graft clamping and exposure to flow. TM-transfected EPCs improved graft anti-thrombotic performance significantly over bare grafts and grafts seeded with native EPCs. Based on these promising in vitro results, grafts were implanted bilaterally into the femoral arteries of athymic rats. Bare grafts and grafts with air removed clotted and had only 25% patency at 7 days. In contrast, graft sodded with native EPCs or TM-transfected EPCs had 87% and 89% respective patency rates. High patency rates continued with 28 day implant testing with EPC sodded grafts (88% Native; 75% TM). There were no significant differences in patency rates at 7 or 28 days between native and TM-transfected grafts. These in vivo data suggest patient blood-derived EPCs can be used to improve the performance of small diameter vascular grafts.