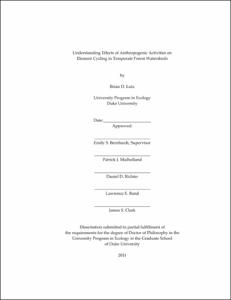 Human activities are increasingly altering the ways in which energy and elements cycle within and move between ecosystems. Through fossil fuel combustion and the use of synthetic fertilizers we continue to expose much of the biosphere to new rates and ratios of essential element supply. We are also shifting climate patterns on local, regional and global scales in ways that affect reaction rates and residence times of elements within ecosystems. Even the simplest ecosystems are usually too complex to predict many of the potential consequences that human activities will have on their sustained functioning. Because of this, we often monitor ecosystems as integrated wholes, looking to explain processes that account for important patterns observed across space and time. This dissertation consists of 3 data chapters, all of which use the small watershed ecosystem as the principal unit of study for understanding how human activities have altered element cycling in temperate forests in the southern Appalachian Mountains.

In Chapter 2, we present results from repeated synoptic surveys of streamwater chemistry for ~30 watersheds spanning one of the largest nitrogen (N) deposition gradients in North America, located within the Great Smoky Mountains National Park. We primarily focus on patterns in dissolved organic matter (DOM) concentrations and composition across the N gradient, with particular attention given to dissolved organic nitrogen (DON). DON dominates the global flux of N between terrestrial and aquatic systems, yet we have little understanding of how this prevailing N form responds to human N pollution. We found that DON concentrations often declined significantly with increasing catchment N loading and, through laboratory bioavailability assays, found that when N limitation is alleviated increased microbial demand for labile carbon (C) may drive this pattern. We use these findings to suggest a new hypothesis for the potential responses of DON to anthropogenic N pollution that accounts for the dual role that DON plays in both C and N cycles.

Chapter 3 is an extension of Chapter 2, in which we attempt to assess the role of DON as either a C or N source within an entire stream reach through a series of independent manipulations of labile C and inorganic N availabilities. In the second order reach of Walker Branch, a well-studied stream in eastern Tennessee, we performed a series of progressive (i.e., sequentially increasing concentrations), kinetic (i.e., very short duration), enrichments of acetate and nitrate on two successive days during April of 2009 before the tree canopy emerged and when in-stream algal production was high. In this system and on these short timescales, we were unable to elicit the same responses observed at sites across the chronic N deposition gradient in Chapter 2. We did, however, observe that DOM processing and composition was significantly altered. Using fluorescence characterization of DOM, we found that adding acetate displaced heterotrophic demand for terrestrially derived DOM. Conversely, nitrate additions stimulated production of highly bioavailable autochthonous DOM within the stream channel, which resulted in an indirect displacement of demand for terrestrially derived DOM. Understanding DOM dynamics in streams has long been a priority for stream ecologists because it represents an important energy and nutrient source fueling stream metabolism. Our results provide new insight into the processes controlling DOM concentrations and composition in Walker Branch, as well as demonstrate the potential of this method for future investigations of DOM in stream ecosystems.

Chapter 4 deviates from the preceding chapters' focus on N availability and ecosystem DOM dynamics, instead assessing the role of climate change on long-term streamwater concentrations and fluxes from the West Fork of the Walker Branch watershed. At this site, mean annual temperatures have increased by ~2&#730;C, while mean annual precipitation and runoff have declined by ~20% and >40%, respectively, since 1989. We use weekly streamwater samples to assess trends in concentrations and fluxes for 9 different solutes over this period and, using wet deposition data, also evaluate changes in approximate watershed input-output budgets. The observed change in runoff was accompanied by a change in the proportional contributions of different soil flowpaths to streamflow generation through time, with deep groundwater playing an increasingly important role in recent years. Solutes that increase in concentration deeper in the soil profile exhibited significant increases in streamwater concentrations through time, while solutes with higher concentrations in soil solution in the upper profile decreased in concentration. Nutrient solutes, which exhibit much less variation across soil flowpaths, typically display large seasonal patterns in streamwater concentrations that are driven by in-stream biological uptake. However, most nutrient solutes exhibited little or no trend in concentrations through time, indicating that the biological controls on these solutes have remained relatively unaltered by the observed changes in climate over the 20-year period. On shorter timescales, changes in the frequency or severity of multi-year droughts, as well as changes in the frequency or intensity of storms that disrupt in-stream uptake, can have large impacts on watershed input-output budgets of nutrient solutes even if the effects do not manifest as linear trends through time. Our results demonstrate the important role that changing climates can have on watershed element cycles, illustrating that climate effects can manifest through either changes in hydrologic regime or through changing biogeochemical process rates.

Taken together, these chapters illustrate that human activities are indirectly but substantially changing biogeochemical cycles in temperate forests throughout the Southern Appalachians. Ecosystem structure and function depends on the ways in which energy and elements move within and between ecosystems. We rely on the sustained integrity of ecosystems for their many services and, because of this, it is essential that we understand ecosystem responses to current and future human impacts.