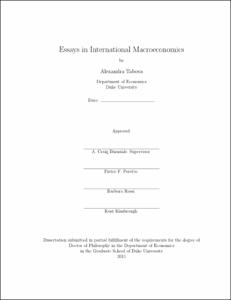 This dissertation consists of two essays in international macroeconomics. In the first essay I explore the role of portfolio diversification in explaining the distribution of foreign investment across countries. I do so by adopting a portfolio allocation approach to risk, that is widely used in empirical finance, to complement more traditional analyses of foreign capital flows across countries. I capture the portfolio diversification motive by a measure of country-specific riskiness, "covariance risk", which I construct as how countries' growth rates covary with the stochastic discount factor of a representative international investor. The idea is to capture the extent to which investments in a foreign economy provide a hedge against the investor's overall risk. My key new empirical finding is a strong and significant correlation between this new measure of country riskiness and foreign investment allocations. Less risky countries, i.e countries whose growth rates are more highly correlated with the investor's stochastic discount factor, receive larger investment shares than more risky countries. I interpret this result as evidence that investors do take into account diversification opportunities not only for portfolio investment decisions but also for foreign direct investment decisions. My empirical results confirm the theoretical predictions of standard portfolio allocation models.

In the second essay I explore the business cycle regularities of low-income countries in comparison to those observed in middle- and high-income countries. The data reveals several distinguishing features of the business cycle in low-income countries compared to the other two income groups: acyclical trade balances; highest volatility of consumption relative to output; highest volatility of debt; highest average debt-to-output ratio and lowest average savings ratio; significant negative correlation between domestic saving rates and the net foreign asset position. My main finding is that a small open economy model with both trend and transitory shocks to productivity, and varying intertemporal elasticity of substitution, motivated by subsistence consumption theories, can be used to account for the distinguishing features of the three income groups. The theoretical model shows that while both permanent shocks and transitory fluctuations around the trend are important sources of fluctuations in low-income countries, temporary shocks play a predominant role. In comparison to the other two income groups the volatility of the temporary shock for the low-income countries is more than three times higher than that for the high-income group and twice as large as that for the middle-income group. The same pattern holds for the permanent shock.