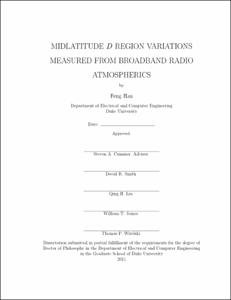 The high power, broadband very low frequency (VLF, 3--30 kHz) and extremely low frequency (ELF, 3--3000 Hz) electromagnetic waves generated by lightning discharges and propagating in the Earth-ionosphere waveguide can be used to measure the average electron density profile of the lower ionosphere (<italic>D</italic> region) across the wave propagation path due to several reflections by the upper boundary (lower ionosphere) of the waveguide. This capability makes it possible to frequently and even continuously monitor the <italic>D</italic> region electron density profile variations over geographically large regions, which are measurements that are essentially impossible by other means. These guided waves, usually called atmospherics (or sferics for short), are recorded by our sensors located near Duke University. The purpose of this work is to develop and implement algorithms to derive the variations of <italic>D</italic> region electron density profile which is modeled by two parameters (one is height and another is sharpness), by comparing the recorded sferic spectra to a series of model simulated sferic spectra from using a finite difference time domain (FDTD) code.

In order to understand the time scales, magnitudes and sources for the midlatitude nighttime <italic>D</italic> region variations, we analyzed the sferic data of July and August 2005, and extracted both the height and sharpness of the <italic>D</italic> region electron density profile. The heights show large temporal variations of several kilometers on some nights and the relatively stable behavior on others. Statistical calculations indicate that the hourly average heights during the two months range between 82.0 km and 87.2 km with a mean value of 84.9 km and a standard deviation of 1.1 km. We also observed spatial variations of height as large as 2.0 km over 5 degrees latitudes on some nights, and no spatial variation on others. In addition, the measured height variations exhibited close correlations with local lightning occurrence rate on some nights but no correlation with local lightning or displaced lightning on others. The nighttime profile sharpness during 2.5 hours in two different nights was calculated, and the results were compared to the equivalent sharpness derived from International Reference Ionosphere (IRI) models. Both the absolute values and variation trends in IRI models are different from those in broadband measurements.

Based on sferic data similar to those for nighttime, we also measured the daytime <italic>D</italic> region electron density profile variations in July and August 2005 near Duke University. As expected, the solar radiation is the dominant but not the only determinant source for the daytime <italic>D</italic> region profile height temporal variations. The observed quiet time heights showed close correlations with solar zenith angle changes but unexpected spatial variations not linked to the solar zenith angle were also observed on some days, with 15% of days exhibiting regional differences larger than 0.5 km. During the solar flare, the induced height change was approximately proportional to the logarithm of the X-ray fluxes. During the rising and decaying phases of the solar flare, the height changes correlated more consistently with the short (wavelength 0.5-4 &Aring), rather than the long (wavelength 1-8 &Aring) X-ray flux changes. The daytime profile sharpness during morning, noontime and afternoon periods in three different days and for the solar zenith angle range 20 to 75 degrees was calculated. These broadband measured results were compared to narrowband VLF measurements, IRI models and Faraday rotation base IRI models (called FIRI). The estimated sharpness from all these sources was more consistent when the solar zenith angle was small than when it was large.