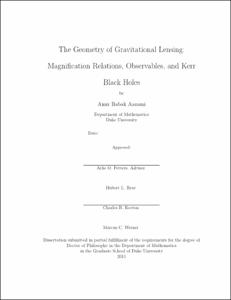 Gravitational lensing is the study of the bending of light by gravity. In such a scenario, light rays from a background star are deflected as they pass by a foreground galaxy (the lens). If the lens is massive enough, then multiple copies of the light source, called lensed images, are produced. These are magnified or demagnified relative to the light source that gave rise to them. Under certain conditions their sum is an invariant: it does not depend on where these lensed images are in the sky or even the details of the lens mass producing them. One of the main results of this thesis is the discovery of a new, infinite family of such invariants, going well beyond the previously known class of two. The application of this result to the search for dark matter in galaxies is also discussed.

The second main result of this thesis is a new general lens equation and magnification formula governing lensing by Kerr black holes, for source and observer lying in the asymptotically flat region of the spacetime. The reason for deriving these quantities is because the standard gravitational lensing framework assumes that the gravitational field of the lens is weak, so that a Newtonian potential can be applied to model it. This assumption obviously breaks down in the vicinity of a black hole, where the gravity is immense. As a result, one has to go directly to the Kerr metric and its associated geometric quantities, and derive an equation for light bending from first principles. This equation is then solved perturbatively to obtain lensing observables (image position, magnification, time delay) beyond leading order.