What Can Philosophical Literature Do? The Contribution of Simone de Beauvoir 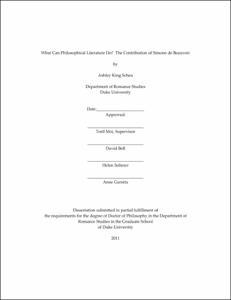 In her theoretical writings on philosophical literature - including "Littérature et métaphysique" (1945), her auto-analysis of her novels in La Force de l'âge (1960), her contribution to the forum, Que peut la littérature? (1965), and her lecture, "Mon expérience d'écrivain" (1966) - Beauvoir confronts a potential impasse in the conception of the philosophical novel, which risks devolving into being either a roman à thèse or a concrete example of a pre-existing philosophical system. This aesthetic impasse becomes particularly acute when Beauvoir begins to write ethical fiction after WWII. This dissertation catalogs Beauvoir's unique philosophical solutions to this aesthetic problem, and in turning to L'invitée and Le sang des autres, demonstrates that Beauvoir's aesthetic innovations open up readings of her novels to new insights about her contributions to twentieth-century literary and philosophical thought, including her thought on separation from the other - solipsism and skepticism - and on connection to the other - love, Mitsein, and reciprocal recognition.

In chapter one, I point to Beauvoir's formulation of the philosophical-literary impasse in "Littérature et métaphysique" and enumerate how this impasse has worked its way into the critical reception of L'invitée. Beauvoir resolves this aesthetic problem through her concept of the philosophical-literary work as a particularly strong appeal to the reader's freedom. In chapter two, I read L'invitée with Beauvoir's aesthetic insights in mind, which has the effect of freeing Beauvoir's novel from the philosophical binds of Sartre's theory of the Look in L'être et le néant. In L'invitée, Beauvoir accounts for and also goes beyond conflict and domination by building a multiplicity of looks through her theme of spectacle in her novel (dance, theater). In chapter three, I show how Beauvoir's turn to ethics and engaged literature after WWII once again raises the specter of the roman à thèse. I thus delineate the differences between engaged literature and the roman à thèse, differences which rely upon the existentialist notion of engaged literature as a dévoilement or unveiling of ethical issues. Finally, in chapter four I show the ways in which Le sang des autres both falls into the traps of the roman à thèse on the one hand and on the other resists that trap through its unveiling of her characters' world as Mitsein and the ambiguous ethical problem of empathy within Mitsein.